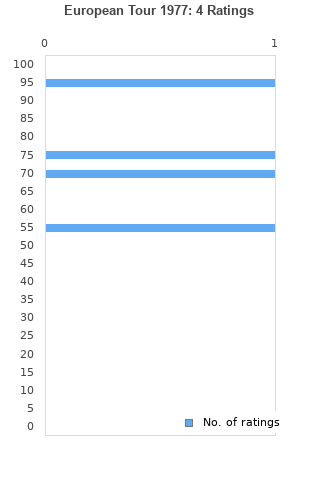 The Carla Bley Band ‎ Lp Vinile European Tour 1977 / Watt 8 Nuovo
Condition: New
Time left: 15d 23h 6m 35s
Ships to: Worldwide
$27.10
Go to store
Product prices and availability are accurate as of the date indicated and are subject to change. Any price and availability information displayed on the linked website at the time of purchase will apply to the purchase of this product.  See full search results on eBay

European Tour 1977 is ranked 5th best out of 12 albums by Carla Bley on BestEverAlbums.com.

The best album by Carla Bley is Social Studies which is ranked number 45197 in the list of all-time albums with a total rank score of 11.

No tracks have been rated on this album yet.
#
Track
Rating/Comments
1.
Rose And Sad Song
Rating: Not enough dataComments:

0
4.
Spangled Banner Minor And Other Patriotic Songs (Including Flags, And Now The Queen, King Korn And The New National Anthem)
Rating: Not enough dataComments:

The best Carla Bley album credited solely to her (unlike Escalator Over The Hill). The album's title is confusing -- it was actually recorded IN THE STUDIO during her European tour. Among the personnel are Soft Machine bassist Hugh Hopper and alto saxophonist Elton Dean, and NRBQ pianist Terry Adams.

Your feedback for European Tour 1977