The Cars (studio album) by The Cars 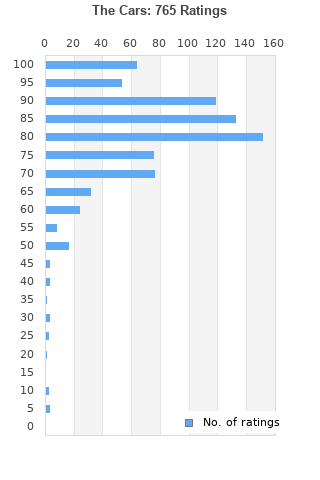 The Cars is ranked as the best album by The Cars. 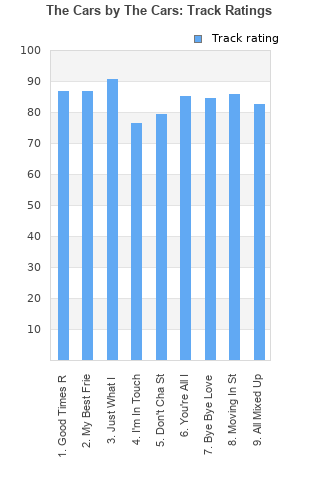 Rating metrics: Outliers can be removed when calculating a mean average to dampen the effects of ratings outside the normal distribution. This figure is provided as the trimmed mean. A high standard deviation can be legitimate, but can sometimes indicate 'gaming' is occurring. Consider a simplified example* of an item receiving ratings of 100, 50, & 0. The mean average rating would be 50. However, ratings of 55, 50 & 45 could also result in the same average. The second average might be more trusted because there is more consensus around a particular rating (a lower deviation).
(*In practice, some albums can have several thousand ratings)
This album is rated in the top 1% of all albums on BestEverAlbums.com. This album has a Bayesian average rating of 81.2/100, a mean average of 80.5/100, and a trimmed mean (excluding outliers) of 81.3/100. The standard deviation for this album is 13.6.

As many people have said before, this is essentially The Cars' greatest hits album. Much like Boston's debut, there were other great songs by this band, but no subsequent album could match what they did right out of the gate. Every single song is worth listening to, from the classic roar of the opener Good Times Roll, to the incredibly quirky I'm in Touch with Your World, to the epic closing duo of Moving in Stereo/All Mixed Up. Essentially a perfect new wave/classic rock album.

Great album, this band sounds for me like more melodic version of Talking Heads and I love it.

The band, musically is OK. The hooks are pretty good, the lyrics are repetitive and oftentimes bubble gum.

But song after song sticks with you. I can’t put my finger on it other than to suggest that some bands are really, really good at writing crisp songs.

Listening to it now, it still sounds like the future of rock music. The Cars' debut blended new wave, synth-rock, hard rock, power pop and 50s rock n' roll/rockabilly into a tight, compact and extremely catchy package. It's amazing that the band managed to pack this level of quality into their debut album. Very fresh and unique sound for the time. Even when compared to 80s new wave/rock artists, I can't really think of any artists who sound like the Cars. And even after new wave died out in the late-80s, in the 90s and 2000s, you can definitely hear the influence of this album and the Cars in general on bands like Weezer, The Killers, Green Day, Teenage Fanclub, the Strokes, Fountains of Wayne, Jimmy Eat World, etc.

A must listen for any music listener.

Overplayed to death on local New England radio stations, but I can't deny that it was instrumental to the New Wave sound.

The first three tracks are classic rock radio staples and for good reason. Some of the best examples of radio friendly pop rock. There's some gold in the deep cuts too. It gets to the point where almost any of the songs had some single potential. This album could probably be considered a bit ahead of its time and The Cars aged very well when the 80s hit.

Ushered in the synth-rock/ new wave era with Blondie in the late 70s and we still benefit from it! Bands like The Killers, The Strokes (especially in their last few albums), and Pulp obviously draw some great inspiration from Ocasek and this album. Great stuff!

Your feedback for The Cars