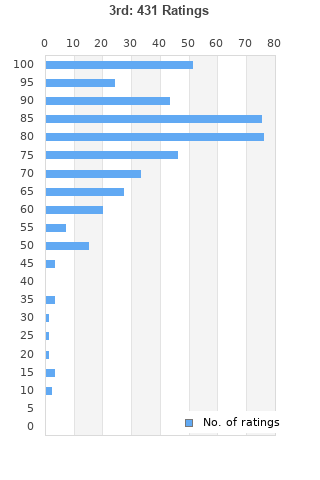 BIG STAR - COMPLETE 3RD VOL 2 / ROUGHS TO MIXES NEW VINYL
Condition: New
Time left: 23h 20m 55s
Ships to: Worldwide
$66.99
Go to store
Product prices and availability are accurate as of the date indicated and are subject to change. Any price and availability information displayed on the linked website at the time of purchase will apply to the purchase of this product.  See full search results on eBay

3rd is ranked 2nd best out of 17 albums by Big Star on BestEverAlbums.com.

The best album by Big Star is #1 Record which is ranked number 381 in the list of all-time albums with a total rank score of 5,131. 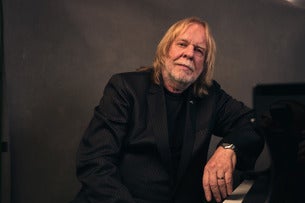 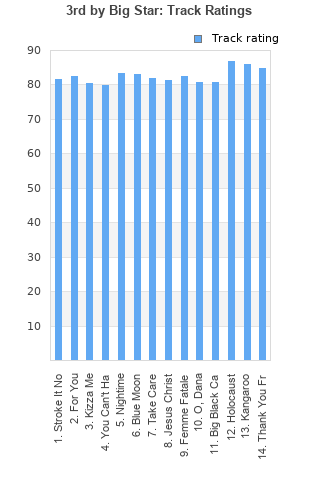 Rating metrics: Outliers can be removed when calculating a mean average to dampen the effects of ratings outside the normal distribution. This figure is provided as the trimmed mean. A high standard deviation can be legitimate, but can sometimes indicate 'gaming' is occurring. Consider a simplified example* of an item receiving ratings of 100, 50, & 0. The mean average rating would be 50. However, ratings of 55, 50 & 45 could also result in the same average. The second average might be more trusted because there is more consensus around a particular rating (a lower deviation).
(*In practice, some albums can have several thousand ratings)
This album is rated in the top 2% of all albums on BestEverAlbums.com. This album has a Bayesian average rating of 79.5/100, a mean average of 78.6/100, and a trimmed mean (excluding outliers) of 79.7/100. The standard deviation for this album is 16.4.

Really wasn't into it at first, just seemed a collection of average mid 70s songs, but then it seemed to kick in (me or the album, not sure) with Oh Dana and Holocaust. Liked For You as well.

A genius musician puts his deteriorating state on tape with haunting, beautiful results. Some of the most sincere, depressing ballads ever are here in "Holocaust" and "Big Black Car." The band is only barely at all tied together, and yet everything sounds deliberate and perfect.

Heartbroken by the lack of commercial success, the band's frontman decided to put out one more solid record before quitting, and the result is surprisingly decent. Half of the tracks on here are dark and depressing, while the rest are quite catchy and cheerful. Some might say that this is the best of Big Star's classic trilogy. I definitely agree with those people's opinions.

As a huge R.E.M fan I've had this album and band on my radar for a very long time (R.E.M have cited Big Star as major influencers).I finally got around to checking 3rd/Sister Lovers out and it did not disappoint . I love this album

The version I listened to was the 18 track version on SPOTIFY which included the 14 tracks here on BEA but in a different order plus 'Native Boy' , 'Till The End Of The Day' , Dream Lover' and 'Downs'. Every track on this album bar 'Native Boy ' and 'Downs' (both of which sounded incomplete) was sublime . I particularly loved the more atmospheric moody songs which make up the majority of the album

3 years ago in January 2015 BEA user JasonZaia posted an excellent comment outlining how he interpreted the album track order and inclusion considering Big Star never really completed this album .... please check out his post before reading on . So what I did was to order his suggested track listing on a Spotify Playlist and listened through . What I discovered was this order completely changed the album context making it a wholly moody atmospheric experience with all power pop elements removed, as I said previously I love the moody pieces and I loved this playlist

I sense that this is an album I would really get into after three or four listens, even as it didn't overwhelm me on the first pass.

Third/Sister Lovers is compelling and a surprisingly pleasant listen.

Parke Putterbaugh of Rolling Stone once described this album as Alex Chilton's "untidy masterpiece" and noted that to listen to it is to be "plunged into a maelstrom of conflicting emotions." That seems about right. This is where the jangling guitars and power pop of Big Star's earlier work begins to fragment and fray, but in a way that is shatteringly gorgeous. My favorite track here is the stark twelve-string guitar ballad "Kanga-Roo," where Chilton's reedy vocals hint at the looming demise of one of rock's greatest and most influential bands.

Being a huge Big Star fan, I have no idea why it took me so long to get into this record. But gracious I'm glad I eventually did. It's such a hauntingly beautiful collection of songs, with such a loose and almost maddening feel. With that said however, the album hangs together very well with a sense of coherence, impressive considering the album was never properly finished. Every song on here is brilliant, but the standout for me is the haunting Big Black Car. Nothing short of a masterpiece, though so are the other two Big Star discs.

Your feedback for 3rd