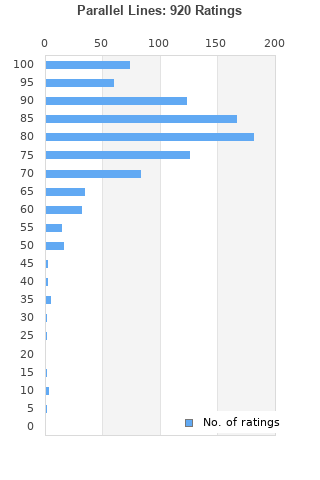 Parallel Lines is ranked as the best album by Blondie. 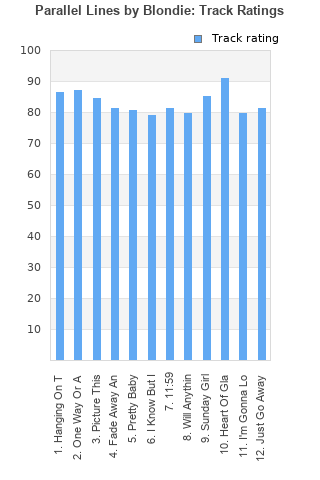 Hanging On The Telephone
Rating: 87 (216 votes)Comments:

Rating metrics: Outliers can be removed when calculating a mean average to dampen the effects of ratings outside the normal distribution. This figure is provided as the trimmed mean. A high standard deviation can be legitimate, but can sometimes indicate 'gaming' is occurring. Consider a simplified example* of an item receiving ratings of 100, 50, & 0. The mean average rating would be 50. However, ratings of 55, 50 & 45 could also result in the same average. The second average might be more trusted because there is more consensus around a particular rating (a lower deviation).
(*In practice, some albums can have several thousand ratings)
This album is rated in the top 1% of all albums on BestEverAlbums.com. This album has a Bayesian average rating of 80.9/100, a mean average of 80.2/100, and a trimmed mean (excluding outliers) of 81.0/100. The standard deviation for this album is 13.3.

Very good album, influential for its time, I love One Way Or Another, Picture This and Heart Of Glass, but overall this album is not my thing.

Parallel Lines is a landmark album and more than forty years later it still rocks. Critic Robert Christgau was accurate when he called it "a synthesis of the Dixie Cups and the Electric Prunes"

This album is a killer synthesis of fast-paced rock with the sweetness of old school doo-wop and girl groups. The band and Debbie Harry's vocals have a slight retro sound, coming off as classy rather than musty. I especially love the Crickets / Buddy Holly cover, a very fitting choice for the group.

Harry's vocals are stunning and powerful. She has a confident, gentle delivery with a tasteful ragged edge, very reminiscent of Nanci Griffith.

The influence of Blondie on later bands is easy to spot, especially rock groups with a lead female singer like No Doubt and especially Paramore. Parallel Lines is a pivitol New Wave album.

Condensed to a 7" Single:
A-Side: Heart of Glass
B-Side: Picture This

Aside from a couple of dogs (I Know But I Don’t Know and Just Go Away), this is a really fun and well constructed record. There’s a lyric in 11:59 that captures the mood of the entire album: “Take me down the highway like a rocket to the ocean”.

That’s the essence. Fast, carefree, here to have a good time. Debbie Harry is perfect in the role of the girl who would give you so many headaches but is irresistible nonetheless.

Heart of Glass and One Way or Another are superb, the rest are adequately enjoyable.

Rock? New wave? Punk? Who knows, it's been called all of them, but the one thing I do know. It's bloody brilliant. Magnificent listen from start to finish. Not one filler track amongst them. Some do take a bit of warming up to but all tracks well slotted to make this an all time classic. Nothing else she done comes close.

Your feedback for Parallel Lines