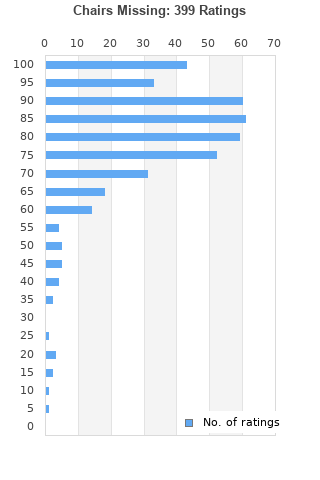 Wire Chairs Missing CD
Condition: Very Good
Time left: 9h 10m 20s
Ships to: Worldwide
$5.00
Go to store
Product prices and availability are accurate as of the date indicated and are subject to change. Any price and availability information displayed on the linked website at the time of purchase will apply to the purchase of this product.  See full search results on eBay

Chairs Missing is ranked 2nd best out of 23 albums by Wire on BestEverAlbums.com.

The best album by Wire is Pink Flag which is ranked number 316 in the list of all-time albums with a total rank score of 6,312. 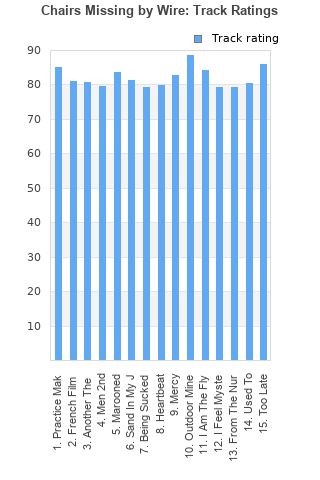 Rating metrics: Outliers can be removed when calculating a mean average to dampen the effects of ratings outside the normal distribution. This figure is provided as the trimmed mean. A high standard deviation can be legitimate, but can sometimes indicate 'gaming' is occurring. Consider a simplified example* of an item receiving ratings of 100, 50, & 0. The mean average rating would be 50. However, ratings of 55, 50 & 45 could also result in the same average. The second average might be more trusted because there is more consensus around a particular rating (a lower deviation).
(*In practice, some albums can have several thousand ratings)
This album is rated in the top 1% of all albums on BestEverAlbums.com. This album has a Bayesian average rating of 81.2/100, a mean average of 80.1/100, and a trimmed mean (excluding outliers) of 81.4/100. The standard deviation for this album is 16.4.

Great follow up after Pink Flag their sound evolved still minimalistic but a change in tempo that builds tension.

What an album, the best post punk i have ever heard

Three tracks I like, Too Late, Outdoor Miner and I Am The Fly. The rest is OK.

Wire reinvented and still managed to equalize the quality of their perfect debut. That says miles about them as a band.

Decent, nothing compared to Pink Flag.
High Points:
Outdoor Miner
I Am The Fly
Too Late

I actually think, chairs missing, is a better record than, pink flag. It really sounds more fully formed than the previous record. Don't get me wrong, I love, pink flag, but this one has more focus and better songs. Genius stuff.

mother of the wipers

I think I honestly lost interest after listening to Pink Flag one too many times. I do think this album was a positive though. There was something great about it. 'I Am The Fly' and a few more I'm sure.

I cannot fault this album

Your feedback for Chairs Missing