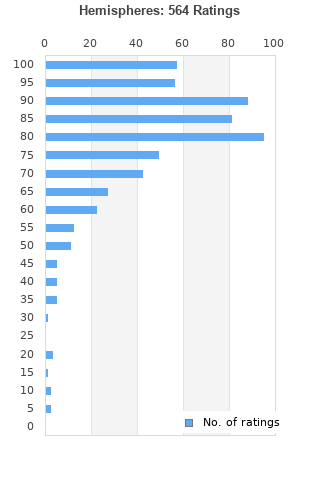 Hemispheres is ranked 3rd best out of 37 albums by Rush on BestEverAlbums.com.

The best album by Rush is Moving Pictures which is ranked number 149 in the list of all-time albums with a total rank score of 11,403. 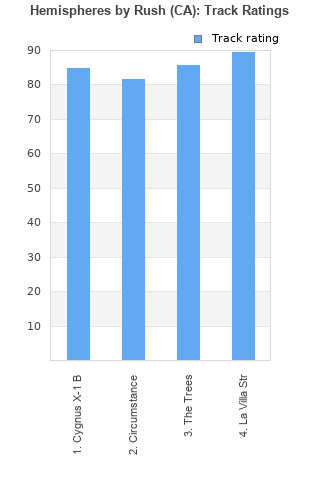 Rating metrics: Outliers can be removed when calculating a mean average to dampen the effects of ratings outside the normal distribution. This figure is provided as the trimmed mean. A high standard deviation can be legitimate, but can sometimes indicate 'gaming' is occurring. Consider a simplified example* of an item receiving ratings of 100, 50, & 0. The mean average rating would be 50. However, ratings of 55, 50 & 45 could also result in the same average. The second average might be more trusted because there is more consensus around a particular rating (a lower deviation).
(*In practice, some albums can have several thousand ratings)
This album is rated in the top 1% of all albums on BestEverAlbums.com. This album has a Bayesian average rating of 81.0/100, a mean average of 80.1/100, and a trimmed mean (excluding outliers) of 81.1/100. The standard deviation for this album is 16.2.

This is a step back compared to AFTK. Especially because one side is filled with 18 minutes of Cygnus II that frankly doesn't bring what the first chapter did. The second side of the album starts off not much better. The album is saved by the closing two tracks.

Every track is an improvement to the one before. The album starts off rather disappointingly but ends with a blast.

As a prog fan I expected to like Rush more than I do. Even in this (supposedly the proggiest) album I am not too fond of side 1, and side 2 is OK, technically great, but it doesn't get to my heart.

Excellent progressive rock album, a natural follow on to A Farewell to Kings although for me AFTK's is the stronger album.
La Villa Strangiato is the standout track.

I never really liked this album even though I'm a Rush fan. Love side 2 (Circumstances, The Trees, La Villa) but really dislike Cygnux X Part 2. Repeated listens don't do anything to help me like the song. The album is rated really highly by prog reviewers and I think that's mainly because of side 1 and La Villa but I have to confess that I don't get it. Oh well.

I never tire of listening to this album over and over. It's like an experience, it's like reading a book of mythology and you're literally living through it. I LOOOVE instrumentals and Villa Strangiato has some cool guitar moments, but I think Rush has their strength in great riffs and progressions. I don't think I really understand what it [i]means[/i] or what it's a commentary on but it's incredible to see all the commentary it elicits and it's great to see other perspectives... truly the effect of a great work of art.

The first side of this album is so obviously goofy with its complex made up story about gods and space adventures, but it doesn't matter because it still manages to be epic. Rush at their finest. La Villa Strangiato is a masterpiece. So much feeling and virtuosity, here. This is probably Rush's best, but I prefer Caress of Steel because it was the first album I really fell in love with by Rush.

All-time favorite album. Not the easiest album to get into, but the reward is in repeated listens

Your feedback for Hemispheres