The Kick Inside (studio album) by Kate Bush 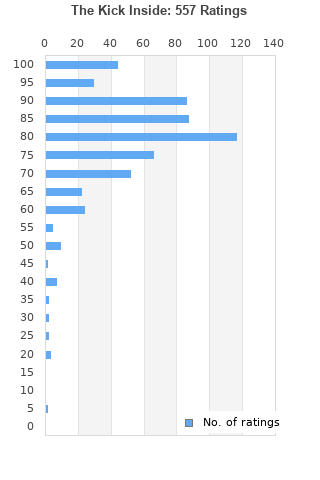 The Kick Inside is ranked 3rd best out of 17 albums by Kate Bush on BestEverAlbums.com.

The best album by Kate Bush is Hounds Of Love which is ranked number 64 in the list of all-time albums with a total rank score of 20,003. 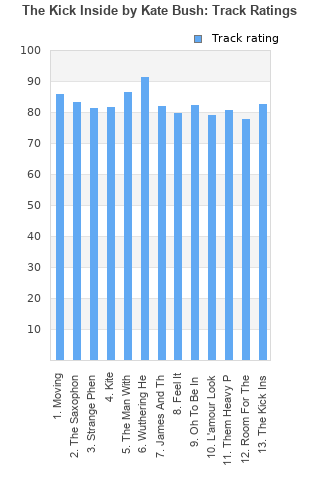 The Kick Inside rankings

The Kick Inside collection

The Kick Inside ratings

Rating metrics: Outliers can be removed when calculating a mean average to dampen the effects of ratings outside the normal distribution. This figure is provided as the trimmed mean. A high standard deviation can be legitimate, but can sometimes indicate 'gaming' is occurring. Consider a simplified example* of an item receiving ratings of 100, 50, & 0. The mean average rating would be 50. However, ratings of 55, 50 & 45 could also result in the same average. The second average might be more trusted because there is more consensus around a particular rating (a lower deviation).
(*In practice, some albums can have several thousand ratings)
This album is rated in the top 2% of all albums on BestEverAlbums.com. This album has a Bayesian average rating of 80.3/100, a mean average of 79.6/100, and a trimmed mean (excluding outliers) of 80.5/100. The standard deviation for this album is 13.9.

The Kick Inside favourites

The Kick Inside comments

Great debut for a great singer "Wuthering Heights" still sounds incredible to this day and the rest of the album is amazing too.
Although I'm not a big fan of Them Heavy People and Room For The Life, tracks like Moving, Saxophone Song and James And The Cold Gun are perfect.

Superb album, worth owning for 'Wuthering Heights'and 'The Man With the Child in His Eyes'.

I love Kate, this album is a masterpiece in skill, mood, and sonics. The stunning combination of singer-songwriting and prog is astonishing.

Every song is great. Really solid album, it maintains it's quality throughout the whole duration.

Kate Bush making an awesome debit album, vocals on point, excellent musicians on this album such as Ian Bairnson and David Gilmour

Some woman singing with an opera-ish, almost - in her most expressive bursts - witch-ish voice with a dense baroque pop production to back it up. People were certainly confused to hear this.

Remarkable vocalist which is more than evident on this record. Moving!

Not sure what I was expecting, but to say I was pleasantly surprised would be an understatement.

It might be inferior compared to a lot of her subsequent work, but "The Kick Inside" is a great album that introduced the otherworldly Kate Bush to the Earth; I can only imagine what the people of 1978 thought of her.

Home of one of the best singles of all time "Wuthering Heights", that should be enough reason to have a listen to the full album, but also, this album really does have no weak tracks to pick on. It's a lovely, bonkers debut from a visionary icon just getting started in her career.

Your feedback for The Kick Inside