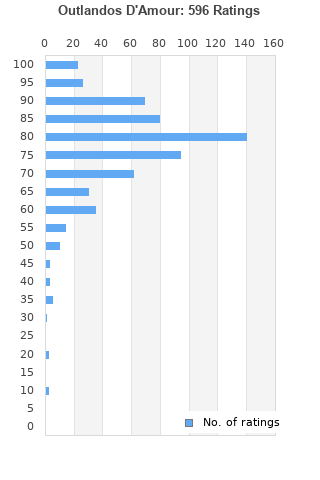 Outlandos D'Amour is ranked 3rd best out of 14 albums by The Police on BestEverAlbums.com.

The best album by The Police is Synchronicity which is ranked number 335 in the list of all-time albums with a total rank score of 5,641. 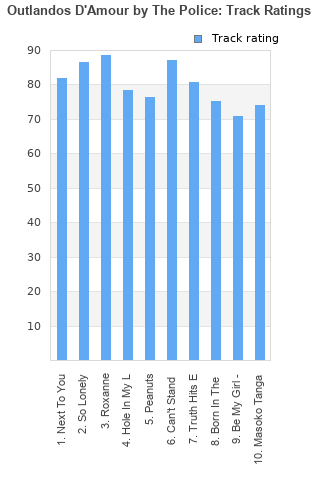 Rating metrics: Outliers can be removed when calculating a mean average to dampen the effects of ratings outside the normal distribution. This figure is provided as the trimmed mean. A high standard deviation can be legitimate, but can sometimes indicate 'gaming' is occurring. Consider a simplified example* of an item receiving ratings of 100, 50, & 0. The mean average rating would be 50. However, ratings of 55, 50 & 45 could also result in the same average. The second average might be more trusted because there is more consensus around a particular rating (a lower deviation).
(*In practice, some albums can have several thousand ratings)
This album is rated in the top 3% of all albums on BestEverAlbums.com. This album has a Bayesian average rating of 77.9/100, a mean average of 77.1/100, and a trimmed mean (excluding outliers) of 78.0/100. The standard deviation for this album is 13.2.

There are some excellent tracks here like Roxanne, Truth Hits Everybody, Next To You, but the rest is mostly annoying high vocals and tracks that are too long.

I'll give you and advice. Skip the last two songs and you have an almost perfect debut album.

i am so disappointed with this album :(

Not a bad album, three great tracks, but badly let down by the last two.

An outstanding debut album full of fresh sound and energy.
The Police is not a band that I like to listen much but I recognize their talent.

Can't help to point out how the spoken part of "Be my girl - Sally" almost blows the unity and flow of the album.

When the seventies veered towards progressive and harder rock/metal The Police reflected music that fit more of my taste. One of my favorites of that decade.

Your feedback for Outlandos D'Amour