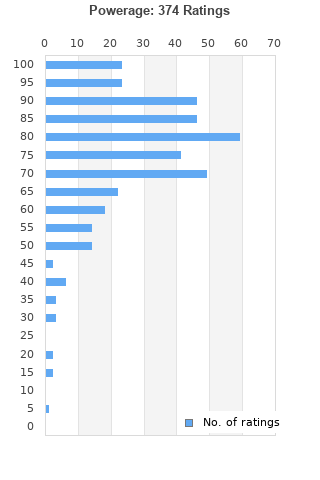 Powerage is ranked 3rd best out of 28 albums by AC/DC on BestEverAlbums.com.

The best album by AC/DC is Back In Black which is ranked number 136 in the list of all-time albums with a total rank score of 12,448. 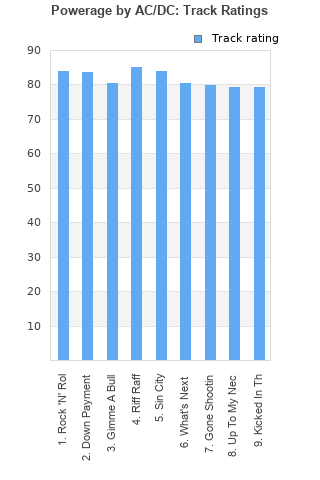 Rating metrics: Outliers can be removed when calculating a mean average to dampen the effects of ratings outside the normal distribution. This figure is provided as the trimmed mean. A high standard deviation can be legitimate, but can sometimes indicate 'gaming' is occurring. Consider a simplified example* of an item receiving ratings of 100, 50, & 0. The mean average rating would be 50. However, ratings of 55, 50 & 45 could also result in the same average. The second average might be more trusted because there is more consensus around a particular rating (a lower deviation).
(*In practice, some albums can have several thousand ratings)
This album is rated in the top 5% of all albums on BestEverAlbums.com. This album has a Bayesian average rating of 76.8/100, a mean average of 75.8/100, and a trimmed mean (excluding outliers) of 76.9/100. The standard deviation for this album is 16.9.

This album suffers a little bit from having no big hits and because of that it's quite underrated (similar quality to Highway To Hell but ranked much lower). I think this is one of the most consistent and kickass AC/DC album probably my second favorite after Back In Black.

This album is criminally underrated. True fans will tell you this is their best or 2nd best album. I personally think Let There Be Rock is slightly better but both are fantastic albums. This album might not have a big radio friendly song but there’s not a single bad song on this album. Down Payment Blues, Riff Raff, Sin City, Gone Shootin’ and Up To My Neck In You are all fantastic songs that are worth checking out

This record does have a few great tracks on here with the highlights for me being Rock 'N' Roll Damnation and Sin City. The rest are also pretty decent and on the whole it is a consistent listen. The music sounds unique and the guitars sound fiery and fresh. It is very easy to rock along to and the choruses are great and very catchy. The vocal is a classic performance and it makes the album feel complete when paired alongside the enjoyable instrumentation. Overall, this album isn't an under rated masterpiece that some people will make you believe it is but it does create a fantastic atmosphere and gives off such an infectious energy that it will be a record you love to listen to.

This album, NO MERCY for the faint hearted, All rockers!

Your feedback for Powerage