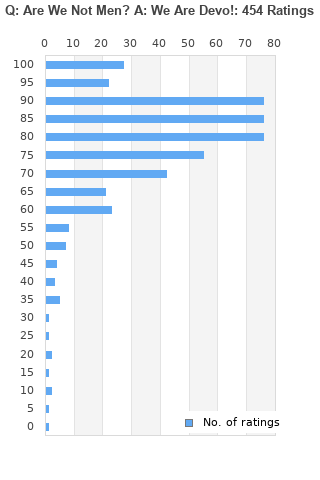 Q: Are We Not Men? A: We Are Devo! is ranked as the best album by Devo.

Listen to Q: Are We Not Men? A: We Are Devo! on YouTube 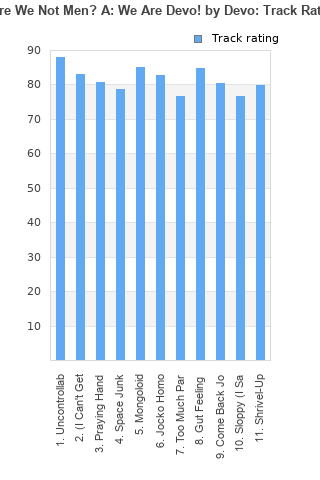 Q: Are We Not Men? A: We Are Devo! collection

Rating metrics: Outliers can be removed when calculating a mean average to dampen the effects of ratings outside the normal distribution. This figure is provided as the trimmed mean. A high standard deviation can be legitimate, but can sometimes indicate 'gaming' is occurring. Consider a simplified example* of an item receiving ratings of 100, 50, & 0. The mean average rating would be 50. However, ratings of 55, 50 & 45 could also result in the same average. The second average might be more trusted because there is more consensus around a particular rating (a lower deviation).
(*In practice, some albums can have several thousand ratings)
This album is rated in the top 2% of all albums on BestEverAlbums.com. This album has a Bayesian average rating of 79.1/100, a mean average of 78.1/100, and a trimmed mean (excluding outliers) of 79.3/100. The standard deviation for this album is 15.5.

Q: Are We Not Men? A: We Are Devo! favourites

Fantastic fun! Their version of Satisfaction is addictive and exciting. Gut Feeling is possibly their best song in general.

Devo wasn't Mark Mothersbaugh's band. It was Mark Mothersbaugh and Gerald Casale's band, and if you want to understand the band better, you really should check out a video on YouTube called Gerald Casale: An Oral History of Devo. It's a brilliant interview, and it puts this album (produced by Brian Eno in a studio in rural Germany) properly in context. I like some of their later, more synth-y and less guitar-y, albums better, but this one is still prime American art-pop of the era.

tiny bits of music here. not much

Devo's debut effort shows off their influences quite prevalently. Punk, ska, surf rock, even some glam rock, though the theatrics aren't quite present. They never seem to slow down enough to give you a break, but I see this as more of a strength rather than something that takes away from the enjoyability of the record. The album is constructed in such a way that makes me realize one thing: they had a very clear goal in mind, to be Devo!

One of the best new wave albums out there.

I cannot recommend this album with any more fervency than I already have. This is a classic in every sense of the word. This album has been an at least once per week listen for me for the last 40 years!!! (Perhaps I exaggerate a tad.) A remarkable achievement for a group of talented musicians. More than a novelty act, Devo had unestimatable music chops, most tellingly in the person of Mark Mothersbaugh (who has gone on outside the confines of Devo to create a vast musical footprint.) I won't belabor the point, just get this album!

Mark Mothersbaugh is really fun to listen to. Fantastic album.

It's a more approachable Remain In Light, but what it sacrifices to achieve that makes it less enjoyable and less influential.

Your feedback for Q: Are We Not Men? A: We Are Devo!