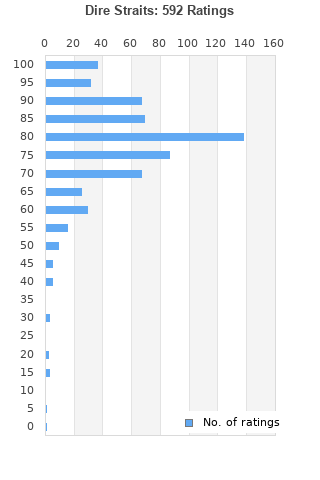 The best album by Dire Straits is Brothers In Arms which is ranked number 225 in the list of all-time albums with a total rank score of 8,255. 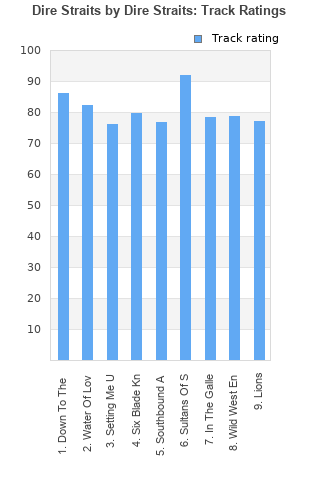 Rating metrics: Outliers can be removed when calculating a mean average to dampen the effects of ratings outside the normal distribution. This figure is provided as the trimmed mean. A high standard deviation can be legitimate, but can sometimes indicate 'gaming' is occurring. Consider a simplified example* of an item receiving ratings of 100, 50, & 0. The mean average rating would be 50. However, ratings of 55, 50 & 45 could also result in the same average. The second average might be more trusted because there is more consensus around a particular rating (a lower deviation).
(*In practice, some albums can have several thousand ratings)
This album is rated in the top 3% of all albums on BestEverAlbums.com. This album has a Bayesian average rating of 78.4/100, a mean average of 77.4/100, and a trimmed mean (excluding outliers) of 78.5/100. The standard deviation for this album is 14.4.

Incredible album, it has this atmosphere of being drunk late at night in pub. Sultans Of Swing is amazing on its own, but it's even better in the context of the whole album.

Disappointing. I thought after listening to the excellent Brothers In Arms album and the song Sultans Of Swing that this would be a great album. But unfortunately I just couldn't get in to it. Found the songs boring and unmemorable. The only shining light on the album is the aforementioned Sultans Of Swing - amazing how Knopfler plays that one live.

a personal favorite since its release.

The rating on the tracks of the album is way to low. Their second best imo, I like pretty much every song.

Dire Straits' self-titled debut is often labelled as "pub rock". Whoever saw these guys play in a small club/pub/bar/whatever should be considered extremely lucky. Excellent guitar work throughout. I love the combinations of genres; folk, blues, rock 'n' roll, little bit of country. Sultans of Swing is an amazing song, one of my favorites to play on guitar (even if I can't keep up during the solo).

(To Boltzmann) The guy comes here to make a superficial and wrong comment on an album, not that I am fanatic for any artist, but we must have the minimum of consistency when commenting, if you don't have a solid and impartial opinion, better be silent , but how to take seriously someone who says: "Best songs of all time:
1. Justify My Love - Madonna "...

You must learn to play a musical instrument before commenting on this album, before continuing to rate Kanye West's albums!

This band's debut album features one of the greatest electric guitar classics due to its impressive collection of perfectly arranged guitar phrases, all of which make "Sultans of Swing" a song even recognized by those who don't know what is an electric guitar. The first track "Down to the Waterline" already has many characteristics of "Dire Straits Sound", the mix of Western, Country and Rock, always with the technical characteristic of "Chicken Pickin '", the excellent "Water of Love" already had a type of resonator acoustic guitar called "Dobro", very exciting sound this instrument would be widely used in the band recordings, other very good tracks like "Six Blade Knife" and "In the Gallery" but that track that really inspires me is the wonderful ballad "Wild West End" with its very tranquil mood and the guitar phrases in the spaces between vocals, and once again the use of "Dobro".

Your feedback for Dire Straits