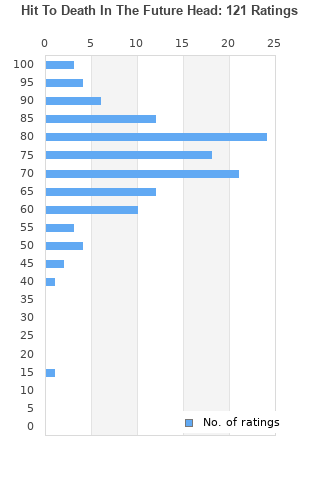 Hit To Death In The Future Head is ranked 11th best out of 46 albums by The Flaming Lips on BestEverAlbums.com.

The best album by The Flaming Lips is The Soft Bulletin which is ranked number 115 in the list of all-time albums with a total rank score of 13,522.

Listen to Hit To Death In The Future Head on YouTube

Hit To Death In The Future Head track list 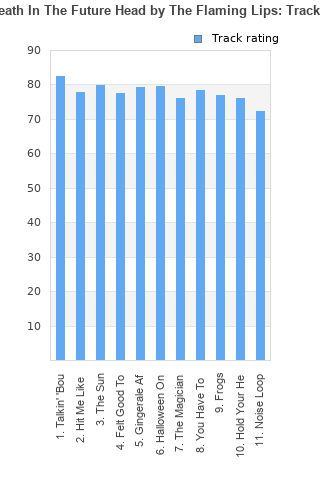 0
5.
Gingerale Afternoon (The Astrology Of A Saturday)
Rating: 79 (17 votes)Comments:

Hit To Death In The Future Head rankings

Hit To Death In The Future Head collection

Hit To Death In The Future Head ratings

Rating metrics: Outliers can be removed when calculating a mean average to dampen the effects of ratings outside the normal distribution. This figure is provided as the trimmed mean. A high standard deviation can be legitimate, but can sometimes indicate 'gaming' is occurring. Consider a simplified example* of an item receiving ratings of 100, 50, & 0. The mean average rating would be 50. However, ratings of 55, 50 & 45 could also result in the same average. The second average might be more trusted because there is more consensus around a particular rating (a lower deviation).
(*In practice, some albums can have several thousand ratings)
This album has a Bayesian average rating of 73.4/100, a mean average of 73.0/100, and a trimmed mean (excluding outliers) of 73.5/100. The standard deviation for this album is 13.1.

Hit To Death In The Future Head favourites

Hit To Death In The Future Head comments

Psychedelic and noisy. Early Flaming Lips at their best, they're starting to transition to more of the space rock/dream pop sort of thing.

I prefer "In A Priest Driven Ambulance", but this one's pretty good as well, if a little bit self-indulgent.. why did they have to add that ridiculous half an hour noise loop to the end though ? Anyway, "Gingerale", "Halloween" and "The Sun" are probably my favourites here, although all the tracks are pretty good.

I personally prefer their previous record "In a Priest Driven Ambulance" over this one. Although the production and the lyrics are pretty good (and make no mistake, this does exceed their 1980s LPs in quality), not many tracks here truly stick and that 29 minute hidden track "noise loop" at the end of it... what the hell were they thinking? By indulging a little too much and having a lower than expected hits to misses ratio, it is a bit of a step down.

Most underrated lips albums. Great contrast between pop melodies and distortion. This album definitely shows their incredibly unique ear. This album and Clouds taste Metallic are my fav lips albums.

The first (of so so many) brilliant Lips albums

This early stuff deserves every bit as much recognition as At War With the Mystics or Embryonic. It's such a unique spin on the alternative rock of the time. Also, Everyone Wants to Live Forever is a top 15 Lips track.

Your feedback for Hit To Death In The Future Head