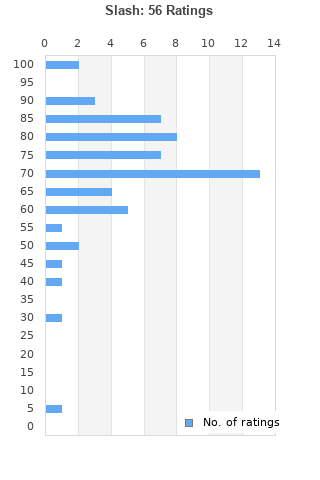 GUNS N' ROSES 'Slash and burn' 1989 UK ARTICLE / clipping
Condition: Very Good
Time left: 5m 28s
Ships to: Worldwide
£11.95
Go to store
Product prices and availability are accurate as of the date indicated and are subject to change. Any price and availability information displayed on the linked website at the time of purchase will apply to the purchase of this product.  See full search results on eBay

Slash is ranked as the best album by Slash. 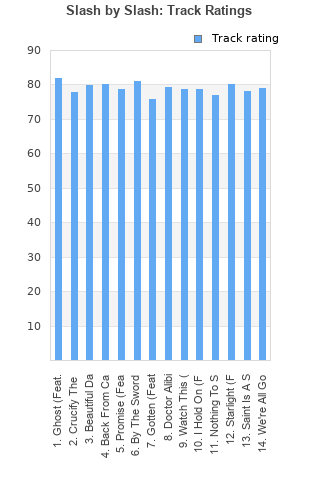 Rating metrics: Outliers can be removed when calculating a mean average to dampen the effects of ratings outside the normal distribution. This figure is provided as the trimmed mean. A high standard deviation can be legitimate, but can sometimes indicate 'gaming' is occurring. Consider a simplified example* of an item receiving ratings of 100, 50, & 0. The mean average rating would be 50. However, ratings of 55, 50 & 45 could also result in the same average. The second average might be more trusted because there is more consensus around a particular rating (a lower deviation).
(*In practice, some albums can have several thousand ratings)
This album has a Bayesian average rating of 71.9/100, a mean average of 70.5/100, and a trimmed mean (excluding outliers) of 71.7/100. The standard deviation for this album is 16.3.

I was pleasantly surprised with this album. It far exceeded my expectations. Slash obviously has a good melodic ear.

This album sucks balls, what a lack of inspiration. Lyrics sound like bad nursery rhymes by burned out vocalist "We're all gonna DIE, so lets get HIGH." "Pee on the GROUND, and jump AROUND." "Doctor nothing wrong with ME, Doctor Doctor cant you SEE, doctor i aint gonna DIE, just write me an ALIBI."
Oh I see what they did there, they rhymed DIE with ALIBI!!! How clever!
Get this album off the top albums of 2010 list and into the trash can. Its generic repetitive rock, and I can't believe it ranks higher than Jane's Addiction "Strays", or other inspired rock albums like Aerosmith's "Night in the Ruts" and I enjoyed a few of Nickelback's records over this record isn't even good as a coaster for a Corona Familiar tallboy. wHAT?!

Great line up of singers. Even better songs

Your feedback for Slash