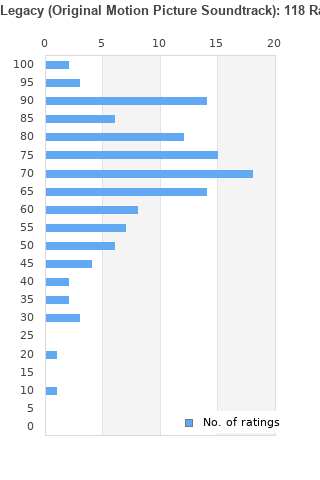 Tron: Legacy is ranked 6th best out of 10 albums by Daft Punk on BestEverAlbums.com.

The best album by Daft Punk is Discovery which is ranked number 150 in the list of all-time albums with a total rank score of 12,142. 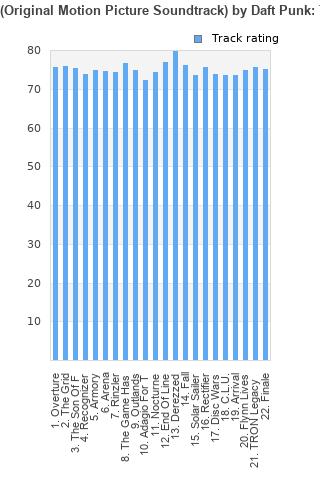 Outliers can be removed when calculating a mean average to dampen the effects of ratings outside the normal distribution. This figure is provided as the trimmed mean. A high standard deviation can be legitimate, but can sometimes indicate 'gaming' is occurring. Consider a simplified example* of an item receiving ratings of 100, 50, & 0. The mean average rating would be 50. However, ratings of 55, 50 & 45 could also result in the same average. The second average might be more trusted because there is more consensus around a particular rating (a lower deviation).
(*In practice, some albums can have several thousand ratings)
This album has a mean average rating of 67.0/100. The trimmed mean (excluding outliers) is 68.0/100. The standard deviation for this album is 18.3.

my Favourite soundtrack ever (and that says a lot). If only he movie was half as good!!!!

Great soundtrack for an average movie. When considering the album in Daft Punk's overall discography however, it just doesn't stand up and makes for a poor listening experience without the visuals to go with it.

You're messing with my Zen thing man. And Daft Punk. I actually think the film was pretty decent. Quality of this is better than the remix, but the remix can be more interesting pending mood.

A good soundtrack to a disappointing film.

Tron plays on a rich seam of nightmarish fantasies about the gap between humanity and technology, and the threat of digital sentience. But this is no Terminator-style wrecking ball. On the evidence of this stunning piece of music, we’d all do well to give a bit more of ourselves over to the machine.

Your feedback for Tron: Legacy