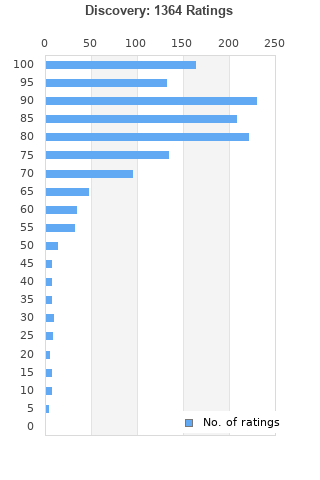 Discovery is ranked as the best album by Daft Punk. 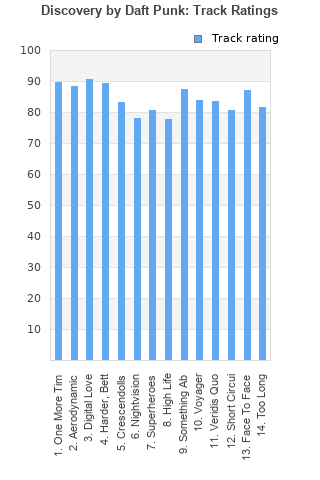 Rating metrics: Outliers can be removed when calculating a mean average to dampen the effects of ratings outside the normal distribution. This figure is provided as the trimmed mean. A high standard deviation can be legitimate, but can sometimes indicate 'gaming' is occurring. Consider a simplified example* of an item receiving ratings of 100, 50, & 0. The mean average rating would be 50. However, ratings of 55, 50 & 45 could also result in the same average. The second average might be more trusted because there is more consensus around a particular rating (a lower deviation).
(*In practice, some albums can have several thousand ratings)
This album is rated in the top 1% of all albums on BestEverAlbums.com. This album has a Bayesian average rating of 82.5/100, a mean average of 80.8/100, and a trimmed mean (excluding outliers) of 82.6/100. The standard deviation for this album is 16.2.

Roughly half the songs have a hook that really works. Bouncy and catchy.

In this way, it’s a really good dance record. Just don’t go in expecting to get much more.

Very nostalgic I have to admit, but it sounds a bit dated.

The opening set of songs on this album are just amazing and really blow me away every time I listen to this record. However, it really does go downhill after that and struggles to get back up to the height it started at. The later tracks just don't seem to grab me and don't really get stuck in your head due to the weak choruses and beats. The album is very cohesive though and has the same vibe and atmosphere throughout which makes the record fly by. It is also very enjoyable and easy to listen too even with its flaws. Overall, this is a great album but I do think it is overrated and just lacks substance to be considered one of the greatest records ever made.

Absolutely every second is classic.

First 5 tracks are great, the rest is not as special or memorable.

More listenable than most EDM, but most individual tracks aren't particularly memorable.

As the annoying rocker kid that I was, I thought everything that wasn't rock sucked, specially electronic music. Then in 1999 Café Tacvba got an double EP with a whole instrumental/electronic set; then it was Radiohead's Kid A in 2000, and a year later this album appeared. I was allured for the first time by the dragonballish illustrations and was caught by the riffs.

Your feedback for Discovery