Human After All (studio album) by Daft Punk 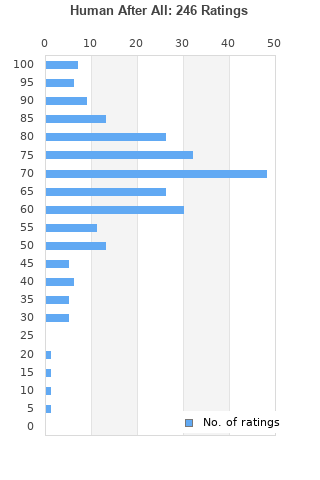 Daft Punk Human After All Vinyl 2 LP Otig 2005 Astralwerks ASW63562 Record VG++
Condition: Used
Time left: 2d 4h 20m 1s
Ships to: Worldwide
$349.00
Go to store
Product prices and availability are accurate as of the date indicated and are subject to change. Any price and availability information displayed on the linked website at the time of purchase will apply to the purchase of this product.  See full search results on eBay

Human After All is ranked 5th best out of 14 albums by Daft Punk on BestEverAlbums.com.

The best album by Daft Punk is Discovery which is ranked number 138 in the list of all-time albums with a total rank score of 12,721. 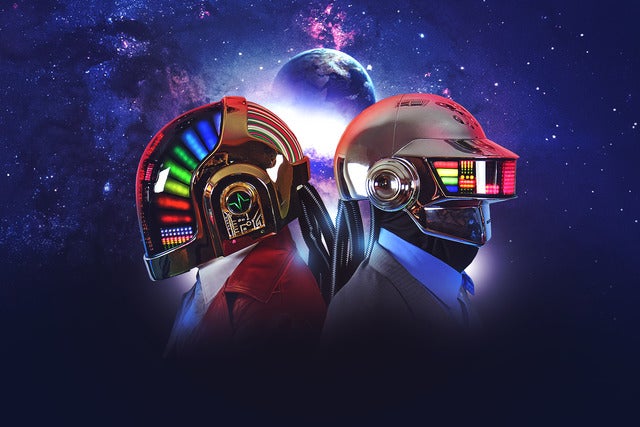 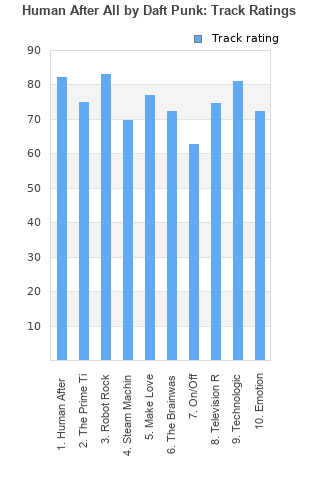 Human After All rankings

Human After All collection

Human After All ratings

Rating metrics: Outliers can be removed when calculating a mean average to dampen the effects of ratings outside the normal distribution. This figure is provided as the trimmed mean. A high standard deviation can be legitimate, but can sometimes indicate 'gaming' is occurring. Consider a simplified example* of an item receiving ratings of 100, 50, & 0. The mean average rating would be 50. However, ratings of 55, 50 & 45 could also result in the same average. The second average might be more trusted because there is more consensus around a particular rating (a lower deviation).
(*In practice, some albums can have several thousand ratings)
This album has a Bayesian average rating of 68.5/100, a mean average of 67.5/100, and a trimmed mean (excluding outliers) of 68.3/100. The standard deviation for this album is 16.4.

Human After All favourites

Human After All comments

Such an underrated album. I think it contains a very simple and in your face message, but people still misunderstand it. Next time you listen to it, just try to listen to the story that these tracks tell you. It blows my mind every time. I know it is not as good as Discovery or RAM, but please people, just give it a try and a proper rating that this masterpiece deserves.

Fantastic for the gym

secretly their best album ! by flirting with industrial rock and electroclash, they created their most innovative work yet to the detriment of a huge portion of their fanbase as well as the general public. the first two singles barely made a dent in the charts, the record subsequently flopped worldwide . one of the main problems that vocal opponents have to "human after all" is that it's 'repetitive'..... lol, you do realise all their work beforehand was repetitive right? and honestly when the music is this good, i wouldn't care if "robot rock" for instance (with its gorgeous funky production) went on for 10 minutes.

the title track & opener is my personal favourite, it builds into a glorious climax - the second half of "prime time of your life" also does this, incrementally getting quicker until it's whirring around your brain at light speed. elsewhere, "technologic" has a downright bizarre spoken word sample but it's so endearing at the same time, very catchy too. "make love" is a thoroughly exquisite song and a necessary breather during the pounding tracklist. i personally love this album, one of the most underrated, and perhaps misunderstood, records of the 00s ; it still sounds futuristic after all this time.

am i going to get slated if i suggest that "human after all" is indeed daft punk's best album ? well it is :)

essentially, this is daft punk distilled to their purest. they could've created another "discovery" and reaped the positive critical reception and commercial success, but the power duo decide to think out of the box and come up with some stunning tracks - unfortunately they were met with critical derision and commercial failure, and I will always hate the fact that occurred. what's even more frustrating is that over a decade later, this record still remains misunderstood and pretty much discarded. please pick it up and listen to it again, and i dont want to hear your "oh, the songs go on for too long" excuse when ambient & prog electronic acts have 20 minute tracks with very little variation. "human after all" can be slightly overwhelming, and I understand a lot of people may be missing the french house production from them, but these are indeed sublime pop songs with welcome doses of electroclash that still sound innovative now. just pick up this record again and tackle it head on ! embrace the robot weirdness <3

Although I really enjoy the other albums, I feel more personally attached to this one. It has had more influence than people expected (look at Justice, Gesaffelstein, and the electro punk of M.I.A. and Death Grips), and it was hated basically because they didn’t do what people expected them to do. And I think - however counterintuitive - this album is the most daft punk of them all. They stripped down the essentials of their image: heavy vocoder usage, drum machines, and most importantly repitition. And I don’t want to sound like a daft purist, but this is why this album will only be understood by real fans.

Daft punk's eerie warning of technology is incomplete in its goals, falling into overall monotony. However it does have a few shining points.

Most of the time annoying and irritating. Those repetitive sounds combined with Daft Punk's monotony make this piece of music unlistenable after some time. There are good (Human after all, prime time of your life) or great (Make love) tunes but overall not very worthy listening.

a decent album but not at all their best. their weakest effort

This album is just too simple and uninteresting. While I admire Daft Link's ability to reinvent themselves they simply missed with this one. Thankfully they are back with RAM.

Your feedback for Human After All