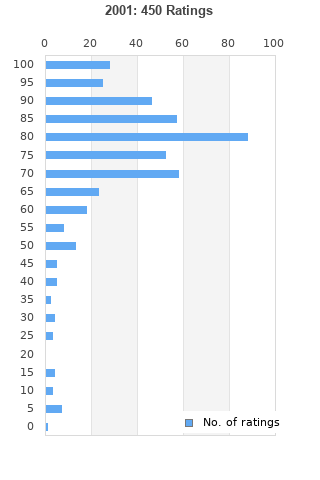 2001
Condition: Very Good
Time left: 1h 33m 49s
Ships to: Worldwide
$6.05
Go to store
Product prices and availability are accurate as of the date indicated and are subject to change. Any price and availability information displayed on the linked website at the time of purchase will apply to the purchase of this product.  See full search results on eBay

The best album by Dr. Dre is The Chronic which is ranked number 447 in the list of all-time albums with a total rank score of 4,386. 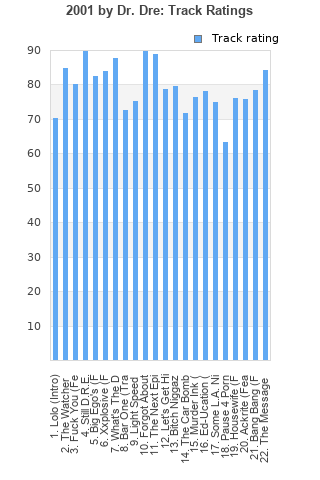 Rating metrics: Outliers can be removed when calculating a mean average to dampen the effects of ratings outside the normal distribution. This figure is provided as the trimmed mean. A high standard deviation can be legitimate, but can sometimes indicate 'gaming' is occurring. Consider a simplified example* of an item receiving ratings of 100, 50, & 0. The mean average rating would be 50. However, ratings of 55, 50 & 45 could also result in the same average. The second average might be more trusted because there is more consensus around a particular rating (a lower deviation).
(*In practice, some albums can have several thousand ratings)
This album is rated in the top 5% of all albums on BestEverAlbums.com. This album has a Bayesian average rating of 77.0/100, a mean average of 74.6/100, and a trimmed mean (excluding outliers) of 77.1/100. The standard deviation for this album is 19.4.

"Dude, I wasn't out of inspiration, I was watching."

Whatever, it's fun. Dr. Dre comes back with an overproduced set of tracks of which the best thing you could say is that they're catchy. All the while keeping up appearences that he's still the mf OG of rap. Sure Dre, as long as you keep them beats coming. I think this guy's career could've been much greater (than it already is) if he had let go of his perfectionism.

I agree that the second half is a little weaker and more filled with skits but it is really chill to listen to nonetheless. The first half of this album is just way to enjoyable for me to ignore. Dope beats that were way ahead of their time, pretty good lyrics overall with some good one-liners. Honestly up to track 12 I would say this album is near perfect but overall, it's a really dope project that has stood the test of time that contains some of the most iconic g-funk songs of all time!

What's the difference might be one of the best instrumental in hip hop history. Eminem's forgot about Dre's verse is also legendary. Best album from Dre IMO.

This is one of my favourite Hip Hop albums and one of the best. I don't know why it isn't rated higher it baffles me.

Rife misogyny notwithstanding, Dr Dre's "2001" is a great album with tremendous production and some great features. I imagine it would've been the sound of the future back then, since all of these tracks hold up so well in 2017. Catchy and just really strong.

BIGGEST HOES... ON PLANET EARTH... ARE WALKIN THROUGH THE MUTHA FUCKIN NEIGHBORHOOD.... YOU KNEW WHEN YOU GOT WITH THE NIGGA HE ALREADY HAD A WOMAN, YOU KNEW HE ALREADY HAD A FAMILY. BUT YA FUCKED HIM ANYWAY! AND THEN WHEN YA THOUGHT YOU GON' LOSE THE NIGGA, YOU WENT N' GOT PREGNANT, DIDN'T YA, BITCH, DIN'T YA?! THE OLD "KEEP-A-NIGGA-BABY." AND THEN WHEN THE NIGGA AIN'T AROUND... WHAT DO YOU TELL THE CHILD? "OH THAT NIGGA AIN'T SHIT, THAT'S WHY YO DADDY AIN'T HERE, CUZ THAT NIGGA AIN'T SHIT!" HOW BOUT BEIN A WOMAN AND TELLIN THE KID THE TRUTH? THAT YO MOMMA... YOU WAS A HO! TELL THE KID: "MOMMA WAS A HO, I WAS WEEKEND PUSSY, I HAD YOU TO KEEP THE NIGGA, IT DIDN'T WORK OUT, THAT'S WHY HE AIN'T HERE. BUT HE A GOOD NIGGA. CUZ HE TAKE CARE OF HIS REAL FAMILY. I WAS JUST A DUMB BITCH. TRYIN TO KEEP. A NIGGA THAT I WANTED."

that player's rant from left-field in the middle of the album is just too perfect. gets me every time. the beats here are classic and this will be heard from cars and jukeboxes until we're extinct. Dre is just such an extreme character. he has great flow and he's clever too, ignore everyone who says he can't rap. you'll be nodding to the beats and smiling if you have any sense of humor.

Great album. Introduced a new generation to Dre in the seven years following The Chronic, 2001 just continues what The Chronic did this fitted for the time period. Still sounds great to this thanks for Dre's production

2001 is G-Funk at its funkiest. There are some awesome verses on the album, but the greatest strength is Dre's production. Even tracks which don't feature Dre's rapping are smooth, particularly "Xxplosive", which is one of my favourite beats ever. Every beat is a classic, making for a production clinic courtesy of one of hip-hop's best.