The best album credited to Dr. Dre is The Chronic which is ranked number 437 in the overall greatest album chart with a total rank score of 4,389.

Dr. Dre is ranked number 311 in the overall artist rankings with a total rank score of 6,768.

The following albums by Dr. Dre are ranked highest in the greatest album charts:

This may not be a complete discography for Dr. Dre.This listing only shows those albums by this artist that appear in at least one chart on this site. If an album is 'missing' that you think deserves to be here, you can include it in your own chart from the My Charts page! 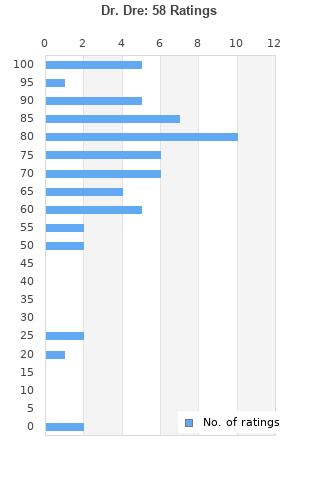 Rating metrics: Outliers can be removed when calculating a mean average to dampen the effects of ratings outside the normal distribution. This figure is provided as the trimmed mean. A high standard deviation can be legitimate, but can sometimes indicate 'gaming' is occurring. Consider a simplified example* of an item receiving ratings of 100, 50, & 0. The mean average rating would be 50. However, ratings of 55, 50 & 45 could also result in the same average. The second average might be more trusted because there is more consensus around a particular rating (a lower deviation).
(*In practice, some artists can have several thousand ratings)
This artist has a mean average rating of 72.0/100. The trimmed mean (excluding outliers) is 74.4/100. The standard deviation for this artist is 22.1.

Along with Kanye West and Dj premier, I think he is in the top 3 producers of all time. I think every artist he worked with had a lot of success in the album Dre produced and their success diminished when Dre stopped producing them (Eminem, 50 cent, Snoop Dogg and Game). Also, he is not a bad rapper but the fact he is using ghostwriter's makes him lose credibility. But, the outcome is still great and that is what matters.

Dre has always has great solo talent. He has also always been a genius at producing and finding new talent. He mixes all that up like a pot of gumbo on this album. The result is a masterpiece.

Dre can find talent like nobody else. He is a top-notch producer, and g-funk was a gift to hip-hop. But the dude can't rap. Stay behind the glass, Dre.

Not part of my genre of choice, but he's quite the producer and gatherer of talent.

Your feedback for Dr. Dre