Beware Of The Dogs (studio album) by Stella Donnelly 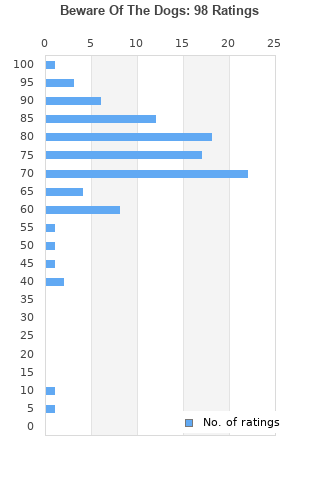 Beware Of The Dogs is ranked as the best album by Stella Donnelly. 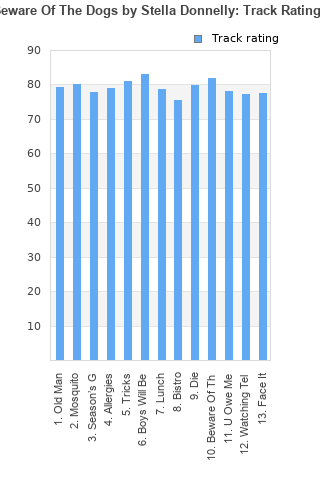 Beware Of The Dogs rankings

Beware Of The Dogs collection

Beware Of The Dogs ratings

Rating metrics: Outliers can be removed when calculating a mean average to dampen the effects of ratings outside the normal distribution. This figure is provided as the trimmed mean. A high standard deviation can be legitimate, but can sometimes indicate 'gaming' is occurring. Consider a simplified example* of an item receiving ratings of 100, 50, & 0. The mean average rating would be 50. However, ratings of 55, 50 & 45 could also result in the same average. The second average might be more trusted because there is more consensus around a particular rating (a lower deviation).
(*In practice, some albums can have several thousand ratings)
This album is rated in the top 13% of all albums on BestEverAlbums.com. This album has a Bayesian average rating of 75.2/100, a mean average of 74.0/100, and a trimmed mean (excluding outliers) of 75.4/100. The standard deviation for this album is 14.3.

Beware Of The Dogs favourites

Beware Of The Dogs comments

This album was fun to listen to. My favorite song - Die

"Beware of dogs" succeeds on the wit and personality of Stella Donnelly. Her jokes and sincere frustration really invest you in what the songs are about. Unfortunately, a good number of the tracks have the standard indie guitar and light synth making it feel must less unique.

This is about as mediocre as you can get.

A bit more relaxed than her rougher, Zeitgeist-hugging debut Ep would suggest, it's still clever and barbed enough to work as a tough kiss-off but the sophista-dream-pop production beings to feel a bit trite by the second half. Still at it's best when it's at it's most pointed and impetous if musically a bit too familiar.

Stella Donnelly was revealed to the public with her first EP "Thrush Metal". Since then, the musician from Perth has managed to find a place on the Australian indie rock scene. On this new album, she is fighting patriarchy through acidic writing as in "Old Man" but also "Season's Greetings" and the insolent "Tricks". Alternating catchy songs and melancholic ballads but not devoid of a sociopolitical conscience, the Australian carries out her mission of putting this system of the dominant male knockout. For a first opus, Stella Donnelly impresses from beginning to end. From cuddly and indie rock ballads to brilliant synthpop sounds, the Perth singer manages to open her eyes to the world for her listener. With a tinged handwriting, it is clear that she manages to embody hope in this troubled time.

Best track: "Boys Will Be Boys"

Your feedback for Beware Of The Dogs