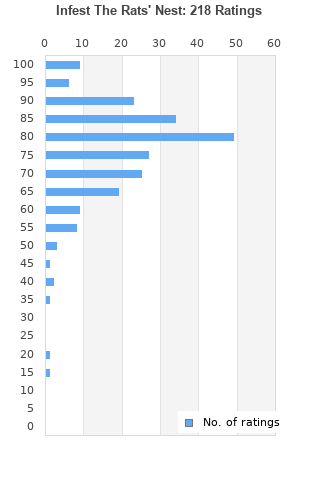 King Gizzard And The Lizard Wizard Infest The Rats' Nest Picture Disc Vinyl LP
Condition: New
Time left: 7d 14h 21m 36s
Ships to: Worldwide
$36.99
Go to store
Product prices and availability are accurate as of the date indicated and are subject to change. Any price and availability information displayed on the linked website at the time of purchase will apply to the purchase of this product.  See full search results on eBay

Infest The Rats' Nest is ranked 5th best out of 16 albums by King Gizzard & The Lizard Wizard on BestEverAlbums.com.

The best album by King Gizzard & The Lizard Wizard is Nonagon Infinity which is ranked number 746 in the list of all-time albums with a total rank score of 2,558. 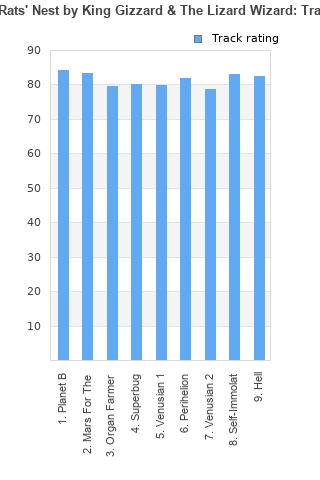 Rating metrics: Outliers can be removed when calculating a mean average to dampen the effects of ratings outside the normal distribution. This figure is provided as the trimmed mean. A high standard deviation can be legitimate, but can sometimes indicate 'gaming' is occurring. Consider a simplified example* of an item receiving ratings of 100, 50, & 0. The mean average rating would be 50. However, ratings of 55, 50 & 45 could also result in the same average. The second average might be more trusted because there is more consensus around a particular rating (a lower deviation).
(*In practice, some albums can have several thousand ratings)
This album is rated in the top 8% of all albums on BestEverAlbums.com. This album has a Bayesian average rating of 76.2/100, a mean average of 75.7/100, and a trimmed mean (excluding outliers) of 76.4/100. The standard deviation for this album is 13.5.

Consistently high energy throughout without any real drop in quality. In fact, I think it gets better as it goes along with my favorite part of the album being the very ending. The lyrics follow an interesting story, the vocals match fit the music and the guitars are sick. This is my first real exposure to King Gizzard & The Lizard Wizard but I understand that this is not their typical album and I'm impressed by their ability to make something as good as this without much experience in doing so.

Never thought King Gizz would go for thrash, but boy did it pay off. Best contribution to the genre since the mid-90s

I cant work out if they are taking the proverbial or if this is a genuine nod to the thrash genre.

What music genre is King Gizzard? The answer is yes, and they have done yet another great job on a genre that some would believe was dead.

An excellent album about a very real issue — climate change. Well performed, doesn't overstay its welcome, and often chillingly poignant. The only gripe, and it's small, is that some of the rhyming choices can be silly. It's a small issue, though.

What a really cool change of pace for these guys. Yeah, its genre tags are "thrash metal" and "stoner metal," but I would say the intensity of it matches the more chaotic moments from Nonagon of Infinity with some aggressive vocals and crazy good guitar work. It's a very fun listen.

Your feedback for Infest The Rats' Nest