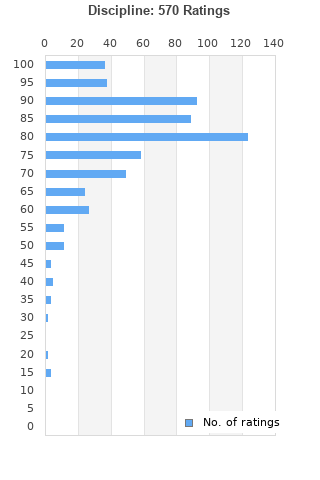 Discipline is ranked 3rd best out of 82 albums by King Crimson on BestEverAlbums.com.

The best album by King Crimson is In The Court Of The Crimson King which is ranked number 25 in the list of all-time albums with a total rank score of 35,149. 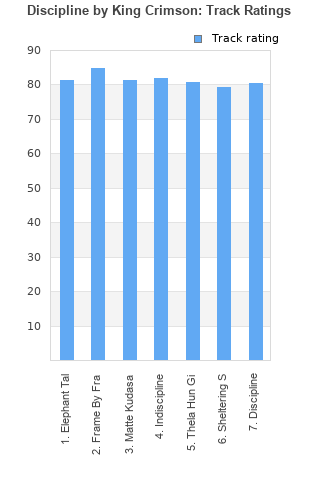 Rating metrics: Outliers can be removed when calculating a mean average to dampen the effects of ratings outside the normal distribution. This figure is provided as the trimmed mean. A high standard deviation can be legitimate, but can sometimes indicate 'gaming' is occurring. Consider a simplified example* of an item receiving ratings of 100, 50, & 0. The mean average rating would be 50. However, ratings of 55, 50 & 45 could also result in the same average. The second average might be more trusted because there is more consensus around a particular rating (a lower deviation).
(*In practice, some albums can have several thousand ratings)
This album is rated in the top 2% of all albums on BestEverAlbums.com. This album has a Bayesian average rating of 80.1/100, a mean average of 79.4/100, and a trimmed mean (excluding outliers) of 80.2/100. The standard deviation for this album is 13.8.

The influences are obvious (Talking Heads, Brian Eno) ane it is more experimental side of King Crimson, but enjoyable nonetheless.

A great album for having come after a lengthy break. A good mix of their classic prog sound and some more easy to access stuff!

A prog album per day saves the day!

I can hear in this album the evidence for influencing later bands (my ear hears elements that would later emerge from Primus and Alice In Chains). I suppose that makes Discipline an important record, but I’m not convinced the influence makes it a great record.

The spoken word lyrics are so, so dumb. And the lack of continuity from song to song makes it tough to truly enjoy.

Their best output during the '80s. Unbelievable how they radically changed their sound but remained King Crimson. Despite the fact that only Fripp and Bruford stayed.

Again KC paved the way for others to follow. Just listen to Elephant Talk and then to Jerry was a Racecar Driver from Primus. KC did it better though.

King Crimson shows how you can stay relevant as a 70's dinosaur. They simply pushed the music forward in another direction.

Been diggin this album for 40 years. Timeless, and awesomely weird.

It's a very busy album which leaves me feeling almost breathless after side 2 concludes. Not an album to put on if you want to relax. I get the references to Talking Heads and it works. What I like about King Crimson is that every album sounds like a different band and this is no exception. When I am in the right mood I really enjoy this, however, personally I prefer the jazzier offerings like Lizard.

I saw Adrian Belew play a bar in Iowa City in...had to be...1981 or 82. So, he had been on Sheik Yerbouti, Remain In Light, this album which everybody seemed to love...and there were maybe 300 people there, and he was playing with a recorded rhythm track so when we got him to do an encore, he just played the first two songs on the tape again. He said, "Who here remembers their first acid trip?" and we whooped and hollered. Amazingly small-time performance for a guy who could play arenas with three different world-class bands at the time.

His vocals and his whole personality just transformed what King Crimson was capable of--Americanized the whole operation, and for the good.

This album was completely on trend at the time, with the talky prose poem over music like Laurie Anderson etc, the Talking Heads-style funk on the opening track, the anagram song title like Eno had done, this was working out iterations of ideas that were in the air at the time. But Fripp was working out his own ideas musically, and his output in these years was very diverse, from his Frippertronics stuff to the album with Daryl Hall and the League of Gentlemen album.

He had done the spiritual study with JG Bennett, and he was coming out with all this diverse product, plus the alternate tuning, and pretty soon he started giving holistic guitar clinics to...anybody who wanted to sign up. Every interview he gave was like words from an oracle, and every album was an important statement. Discipline, for the crowd I was hanging with, was a monolithic, landmark album, we didn't so much listen to it as study it. Stands up pretty well after all these years.

Your feedback for Discipline