Ghost In The Machine (studio album) by The Police 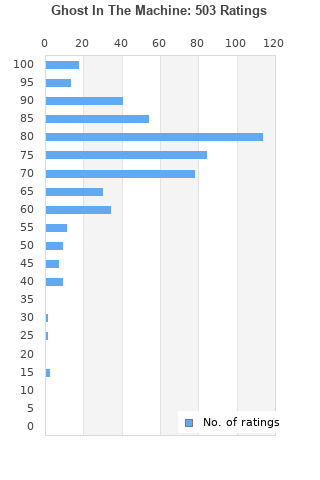 Ghost In The Machine is ranked 4th best out of 14 albums by The Police on BestEverAlbums.com.

The best album by The Police is Synchronicity which is ranked number 337 in the list of all-time albums with a total rank score of 5,767.

Tickets from Ticketmaster Get tickets
May
21
Sat
18:00 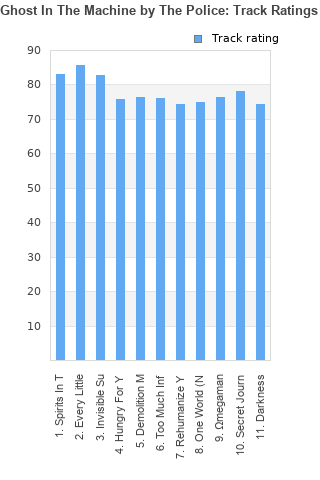 Every Little Thing She Does Is Magic
Rating: 85 (172 votes)Comments:

Ghost In The Machine rankings

Ghost In The Machine collection

Ghost In The Machine ratings

Rating metrics: Outliers can be removed when calculating a mean average to dampen the effects of ratings outside the normal distribution. This figure is provided as the trimmed mean. A high standard deviation can be legitimate, but can sometimes indicate 'gaming' is occurring. Consider a simplified example* of an item receiving ratings of 100, 50, & 0. The mean average rating would be 50. However, ratings of 55, 50 & 45 could also result in the same average. The second average might be more trusted because there is more consensus around a particular rating (a lower deviation).
(*In practice, some albums can have several thousand ratings)
This album is rated in the top 11% of all albums on BestEverAlbums.com. This album has a Bayesian average rating of 75.5/100, a mean average of 75.1/100, and a trimmed mean (excluding outliers) of 75.5/100. The standard deviation for this album is 13.0.

Ghost In The Machine favourites

Ghost In The Machine comments

The first 5 songs are pretty good, it gets really annoying after that; too brassy, loud, and bombastic with not enough substance to back it up.

Has anyone noticed, the three symbols are their heads? Misunderstood album. It is a dark, serious, album, other than "Everything she does is magic". I love "Darkness", no one else seems to.

Favoritas: Demolition Man, Every Little Thing She Does Is MAgic, Spirits In The Material World, Invisible Sun

my favorite police-album,
invisible Sun is their best song ever

A darker record from The Police. As always, the singles from the album are fantastic. Every little thing she does is magic, spirits in the material world, and, invisible sun, are all excellent. The rest of the album is fine, another good Police record.

The first two tracks are really good. That's about it though.

To me the lowest point of The Police's discography, too many trumpet, too many pop, too few rock. I feel it to have little energy.

Your feedback for Ghost In The Machine