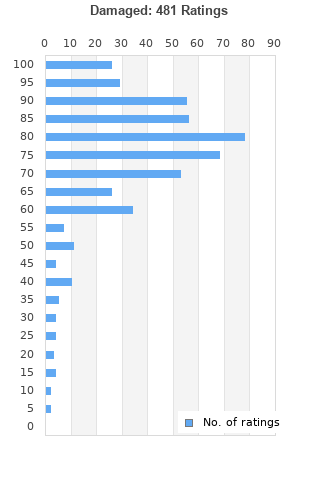 Damaged is ranked as the best album by Black Flag. 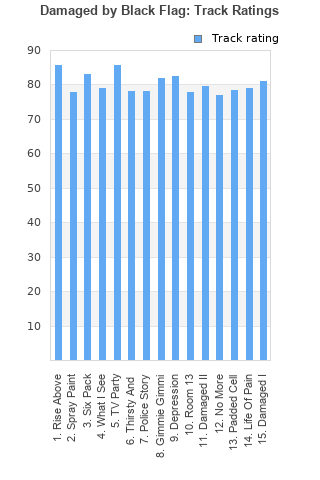 Rating metrics: Outliers can be removed when calculating a mean average to dampen the effects of ratings outside the normal distribution. This figure is provided as the trimmed mean. A high standard deviation can be legitimate, but can sometimes indicate 'gaming' is occurring. Consider a simplified example* of an item receiving ratings of 100, 50, & 0. The mean average rating would be 50. However, ratings of 55, 50 & 45 could also result in the same average. The second average might be more trusted because there is more consensus around a particular rating (a lower deviation).
(*In practice, some albums can have several thousand ratings)
This album is rated in the top 7% of all albums on BestEverAlbums.com. This album has a Bayesian average rating of 76.2/100, a mean average of 75.1/100, and a trimmed mean (excluding outliers) of 76.3/100. The standard deviation for this album is 17.6.

I definitely love Greg Ginns guitar work more than Henry Rollins vocals, but this is one of the best examples of anger+depression in music. Depression is my favorite from here but Gimme Gimme is another personal favorite.

A great example of a punk record that exerts facetiousness and rightfully takes the piss out of a lot bullshit. Slightly heavy-handed at times, but it pairs nicely with the heavy guitars. This record is still being misinterpreted as mindless, party drivel by college frat boys to this day.

useless garbage should be admired for how awful it is. u.s. punk

Can't say I loved it, but it wasn't long enough to feel too badly about it either.

I've never been more convinced I didn't like something after giving it 3 listens. It's even worse than punk. Somehow it got more childish, more outputting, less mature, and even less musically interesting than its predecessors in it's genre who it's not even worth my time to fully type out. Not for me!

Great bass tone. Sounds a bit like a RAT or something on the bass fuzz.

Getting drunk and smashing a mirror.

Angry, raw, emotional, and even funny. Will leave you with a bloody nose, but intense admiration for the work.

One of the best hardcore punk albums ever. Angry, aggressive, and noisy. Black Flag at their best.

Classic punk album, and one of the definitive documents of the 80s hardcore scene. The guitar tone is among the greatest (as well as angriest & nastiest) in all of punk rock.

Your feedback for Damaged