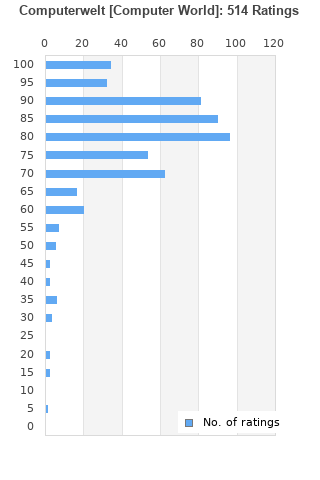 KRAFTWERK COMPUTER WORLD (COMPUTERWELT) NEON YELLOW VINYL GERMAN VERSION
Condition: New
Time left: 24d 6h 49m 17s
Ships to: Worldwide
£29.99
Go to store
Product prices and availability are accurate as of the date indicated and are subject to change. Any price and availability information displayed on the linked website at the time of purchase will apply to the purchase of this product.  See full search results on eBay

Computerwelt [Computer World] is ranked 3rd best out of 20 albums by Kraftwerk on BestEverAlbums.com.

The best album by Kraftwerk is Trans Europa Express which is ranked number 283 in the list of all-time albums with a total rank score of 6,830. 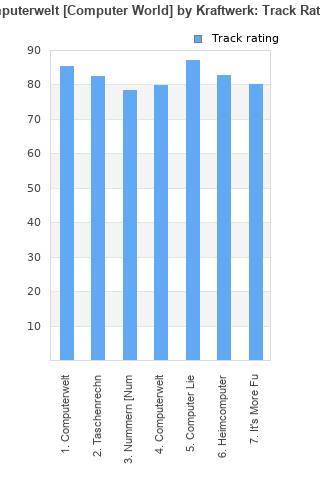 Rating metrics: Outliers can be removed when calculating a mean average to dampen the effects of ratings outside the normal distribution. This figure is provided as the trimmed mean. A high standard deviation can be legitimate, but can sometimes indicate 'gaming' is occurring. Consider a simplified example* of an item receiving ratings of 100, 50, & 0. The mean average rating would be 50. However, ratings of 55, 50 & 45 could also result in the same average. The second average might be more trusted because there is more consensus around a particular rating (a lower deviation).
(*In practice, some albums can have several thousand ratings)
This album is rated in the top 1% of all albums on BestEverAlbums.com. This album has a Bayesian average rating of 80.8/100, a mean average of 79.5/100, and a trimmed mean (excluding outliers) of 81.0/100. The standard deviation for this album is 14.1.

Tough one to rate. On the one hand, the music is so dated but on the other hand, the band really grasped the coming social and personal problems that would emerge in the computer age.

This is an album that is so short and sweet and it is packed full of enjoyable moments that make it so easy to fall in love with. Tracks like Computer World and Computer Love are so catchy and have such an amazing rhythm that you feel like you are getting infected by them. Musically, it can sound a little dated at times with some of the synthesisers but that just adds to the charm of the record for me. Whilst it is dated now when it first released it must have been completely stunning and unique to hear. The vocal matches the sound perfectly as well which creates a brilliant techno feel. At times the record can feel a little repetitive with the same or similar beats being used quite a lot. Overall, an album that is hard not to enjoy and one that is a pleasure for me to play every time I do.

Oh dear. There are some nice moments but this sounds so dated. Very boring in places, and the vocoder vocals are so naff and the childish one-fingered synth melody lines get quite annoying. Sorry, but they had passed the torch on by this time and there so many better electronic albums in 1981 from the UK post-punk new wave creative explosion and from YMO. Only highlight is Home Computer which at least does some interesting stuff.

Inventive as always. Computer World is one of the best Kraftwerk has to offer.

I always asked myself why exactly I was listening to this album, but somehow I kept returning to it. It’s the most rhythmically creative album by them if you ask me, to the point it becomes rather hypnotizing. Paradoxically it is also the most melodically oriented album by them. It is certainly their strangest.

Your feedback for Computerwelt [Computer World]