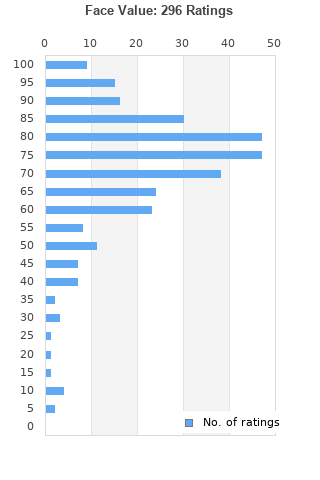 Face Value is ranked as the best album by Phil Collins. 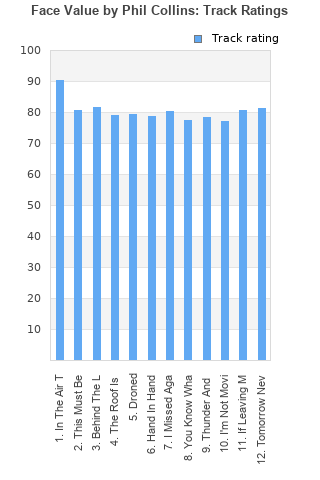 Rating metrics: Outliers can be removed when calculating a mean average to dampen the effects of ratings outside the normal distribution. This figure is provided as the trimmed mean. A high standard deviation can be legitimate, but can sometimes indicate 'gaming' is occurring. Consider a simplified example* of an item receiving ratings of 100, 50, & 0. The mean average rating would be 50. However, ratings of 55, 50 & 45 could also result in the same average. The second average might be more trusted because there is more consensus around a particular rating (a lower deviation).
(*In practice, some albums can have several thousand ratings)
This album has a Bayesian average rating of 73.1/100, a mean average of 71.3/100, and a trimmed mean (excluding outliers) of 73.1/100. The standard deviation for this album is 18.4.

I like Phil Collins but like many in the 80's got sick of seeing him as he inundated the album charts with solo albums, Genesis work, on other artists records, movies (Buster), Live Aid (both UK and US), etc. you get the drift. I haven't recovered from this saturation decades later. I only own this record and Hello I Must Be Going, by the time Sussudio came out I was done. Face Value is the exception, I still listen to this album on a regular basis. It balances the arty prog style with Phil's more pop side and works better than most of the pop oriented Genesis material - I prefer it to Abacab, Genesis, or any of their later albums. Its a diverse collection of songs that I don't tire of, a shame he moved towards more pop and ballads.

The Roof Is Leaking is the forgotten gem of this album.

Crimson; what the hell are you talking about?

People have 3 faces: The one you show to society, the one that you show yourself, and the one you have when you listen to Phill Collins.

This is Collins', blood on the tracks, his break up record. It's really a mixture of Collins' more arty sounds and his more commercial songs. Obviously, in the air tonight, is fantastic, an early 80's classic. This must be love, is also an excellent track. There's a some other great moments here too, especially the, the roof is leaking/droned/hand in hand sequence. Occasionally, Collins slips into that poppy groove, but thankfully there's nothing bad here, the cover of The Beatles, tomorrow never knows, is very good, it sticks true to the original, but Collins makes it his own too. This really is the Phil Collins album for people who don't like Phil Collins. It's not perfect, and it probably could have been a lot better, but still, it's very good.

Not enough alt rock on this album for many here :P

Very good album that happens to be underrated

Your feedback for Face Value