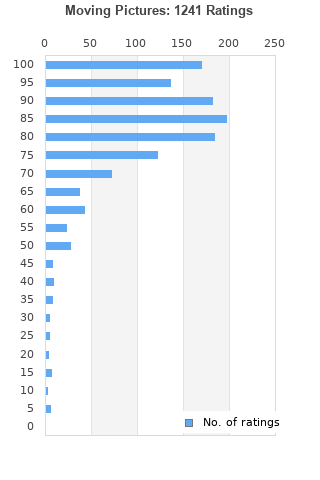 Moving Pictures is ranked as the best album by Rush. 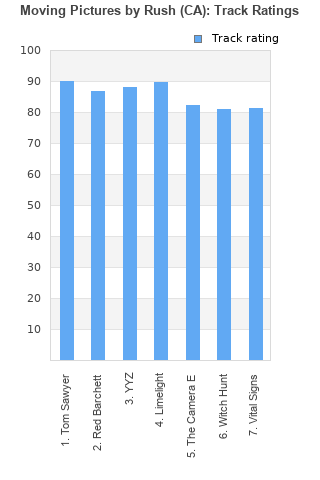 Rating metrics: Outliers can be removed when calculating a mean average to dampen the effects of ratings outside the normal distribution. This figure is provided as the trimmed mean. A high standard deviation can be legitimate, but can sometimes indicate 'gaming' is occurring. Consider a simplified example* of an item receiving ratings of 100, 50, & 0. The mean average rating would be 50. However, ratings of 55, 50 & 45 could also result in the same average. The second average might be more trusted because there is more consensus around a particular rating (a lower deviation).
(*In practice, some albums can have several thousand ratings)
This album is rated in the top 1% of all albums on BestEverAlbums.com. This album has a Bayesian average rating of 82.6/100, a mean average of 81.3/100, and a trimmed mean (excluding outliers) of 82.7/100. The standard deviation for this album is 16.5.

Considered to be the best Rush album by many, I don't see it this way. I like it a lot. The musicians are excellent. They many to make every track interesting at least.

But not all of the tracks are excellent. Some of the mediocre ones bring it down to 8 out of 10 for me.

Classic RUSH and one of the great albums of all time.

At its best, this album soars. Limelight and Tom Sawyer are among the best prog rock songs ever recorded, in my opinion.

The final three songs, however, are an example of prog rock without a hook. Tough to get through.

Further to my comment in 2017, I felt the need to update by feeling on this album. Sadly, with the loss of the great Neil Peart, the album will surely become as iconic as Yes Close to the Edge and King Crimson Court of the Crimson King. If I ever generate enough points to produce custom charts, I think this album may well be in first place in my best progressive albums of all time!

Over all a great album but maybe a little bit unbalanced. Side one is awesome with some of their best and most famous songs. Side two is not as good but OK.

Best album from Rush. The last great prog rock album, very good from the first to the last song, hard to pick a favorite. Although it is musically complex, it is easy to hear and enjoy. Very underrated, one of the best albums of the decade.

I like the way Geddy Lee sings this album is a top favorite. Best songs: Tom Sawyer, YYZ, Limelight.

Your feedback for Moving Pictures