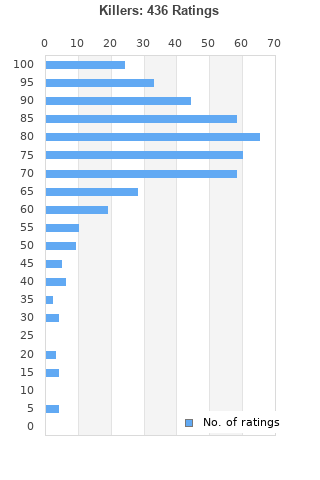 Killers is ranked 6th best out of 36 albums by Iron Maiden on BestEverAlbums.com.

The best album by Iron Maiden is The Number Of The Beast which is ranked number 277 in the list of all-time albums with a total rank score of 6,839. 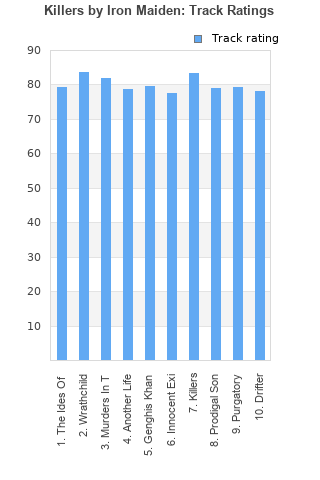 Rating metrics: Outliers can be removed when calculating a mean average to dampen the effects of ratings outside the normal distribution. This figure is provided as the trimmed mean. A high standard deviation can be legitimate, but can sometimes indicate 'gaming' is occurring. Consider a simplified example* of an item receiving ratings of 100, 50, & 0. The mean average rating would be 50. However, ratings of 55, 50 & 45 could also result in the same average. The second average might be more trusted because there is more consensus around a particular rating (a lower deviation).
(*In practice, some albums can have several thousand ratings)
This album is rated in the top 4% of all albums on BestEverAlbums.com. This album has a Bayesian average rating of 77.1/100, a mean average of 75.5/100, and a trimmed mean (excluding outliers) of 77.2/100. The standard deviation for this album is 17.4.

The quality is similar to the first album, the songs are faster but I think that they are mixed bad, because I often can't hear the vocals.

Great album, possibly my favourite Maiden album. Any Samson fans will know the first track was born by Samson on their Head On album going under the name Thunderburst.

Not as strong as there debut but still with a lot of great songs. A few of them have a bit of a same feel about them and Di'Anno's vocals aren't quite up to par as with the first album. But still a great album which deserves to be about where it seems to be placed in the rankings of Maiden albums. There's a few that are better, there are more that are worse.

I much prefer the first album, I only really like 'Wrathchild' on this one. 'Better' production is one of the problems but the main one is that most of these tracks are too fast. 'Prodigal Son' is the only track that does not sound like they are in a race, you've guessed it I am no fan of thrash metal either.

I like all of their phases, even the Blaze Bayley one (well, partly at least). Fierce, energetic, punk-like and imaginative. One of their best overally

Killers, is a massive improvement on the debut in my opinion. Better production, tighter songs(although there are more out and out Maiden classics on the first record) in, wrathchild, and, murders in the rue morgue. Classic metal.

My favourite of the albums with Paul Di'Anno on the vocals.

Your feedback for Killers