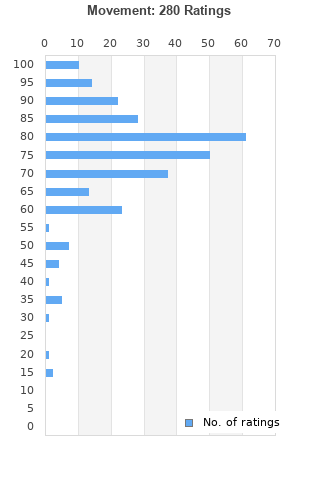 New Order-Movement (UK IMPORT) Vinyl / 12" Album NEW
Condition: New
Time left: 14h 55m 40s
Ships to: Worldwide
$38.23
Go to store
Product prices and availability are accurate as of the date indicated and are subject to change. Any price and availability information displayed on the linked website at the time of purchase will apply to the purchase of this product.  See full search results on eBay

Movement is ranked 6th best out of 29 albums by New Order on BestEverAlbums.com.

The best album by New Order is Power, Corruption & Lies which is ranked number 262 in the list of all-time albums with a total rank score of 7,601. 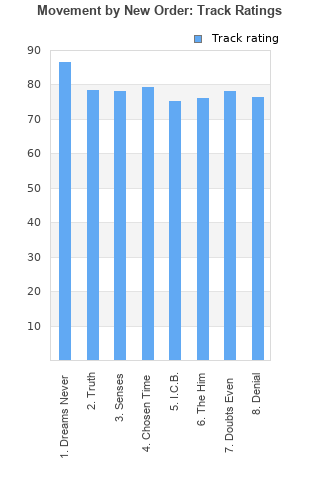 Rating metrics: Outliers can be removed when calculating a mean average to dampen the effects of ratings outside the normal distribution. This figure is provided as the trimmed mean. A high standard deviation can be legitimate, but can sometimes indicate 'gaming' is occurring. Consider a simplified example* of an item receiving ratings of 100, 50, & 0. The mean average rating would be 50. However, ratings of 55, 50 & 45 could also result in the same average. The second average might be more trusted because there is more consensus around a particular rating (a lower deviation).
(*In practice, some albums can have several thousand ratings)
This album is rated in the top 9% of all albums on BestEverAlbums.com. This album has a Bayesian average rating of 75.8/100, a mean average of 75.0/100, and a trimmed mean (excluding outliers) of 75.9/100. The standard deviation for this album is 14.2.

So there are no actual songs here but the hypnotic repetitive droning grooves are excellent - I like this more now than I did in the 80's.

More Joy Division than New Order, which isn't a bad thing as both eras are worth listening to.

I really like this record. Despite the stylistic differences to what New Order would go on to do, there is definitely a transition feel to the music contained within the LP. The famous New Order bass makes an appearance, and the songwriting is undeniably them. It's a post-punk album, but only by dint of the fact that the band were still forming from the ashes of Joy Division, as they take in alternative dance and dance-punk as genres too. I feel they went on to stronger things, but could completely understand someone who felt they peaked with their first release.
Strongest track: Senses

First New Order album sounds just like Joy Division without Ian Curtis' voice and lyrics. It's still a really good record and it's understandable that it would sound like their last record(i.e.. Joy Division) but it can't help being weighed down by that great band. Still, a good album, just living in the shadows.

Consistently fine. Never brilliant, but never mediocre. At the very least, it's an interesting album for its unique position in the evolution of the former Joy Division members towards the sound that would define New Order a couple of years later.

A fine debut album by New Order, though it's not on the level like PCL, Low-Life, or Technique but it was the start of something for a band who had lost their lead singer and were searching for a new direction to go to.

A little bit Eerie.... I keep thinking Ian Curtis is going to start singing.
Best song: dreams never end ... And it sounds more like the future
New order to come

Doubts Even Here is the best track in my opinion, this is a lot better than their later work, it might even be New Order's best album.

Your feedback for Movement