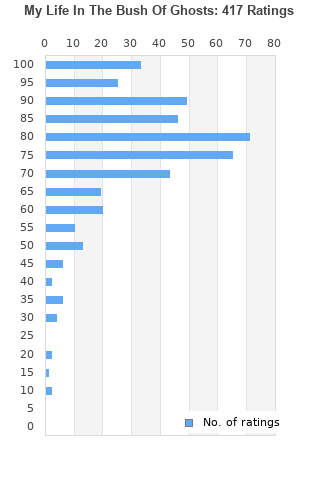 David Byrne - My Life in the Bush of Ghosts [New CD] UK - Import
Condition: Brand New
Time left: 21h 27m 59s
Ships to: Worldwide
$20.29
Go to store
Product prices and availability are accurate as of the date indicated and are subject to change. Any price and availability information displayed on the linked website at the time of purchase will apply to the purchase of this product.  See full search results on eBay

My Life In The Bush Of Ghosts is ranked as the best album by Brian Eno & David Byrne.

Listen to My Life In The Bush Of Ghosts on YouTube

My Life In The Bush Of Ghosts track list 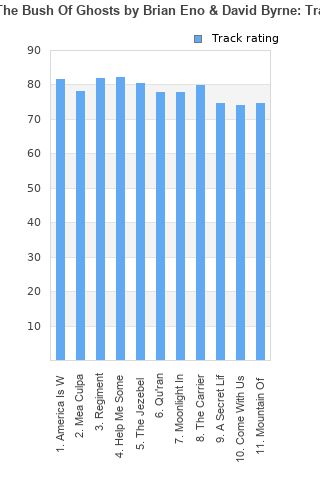 My Life In The Bush Of Ghosts rankings

My Life In The Bush Of Ghosts collection

My Life In The Bush Of Ghosts ratings

Rating metrics: Outliers can be removed when calculating a mean average to dampen the effects of ratings outside the normal distribution. This figure is provided as the trimmed mean. A high standard deviation can be legitimate, but can sometimes indicate 'gaming' is occurring. Consider a simplified example* of an item receiving ratings of 100, 50, & 0. The mean average rating would be 50. However, ratings of 55, 50 & 45 could also result in the same average. The second average might be more trusted because there is more consensus around a particular rating (a lower deviation).
(*In practice, some albums can have several thousand ratings)
This album is rated in the top 4% of all albums on BestEverAlbums.com. This album has a Bayesian average rating of 77.8/100, a mean average of 77.1/100, and a trimmed mean (excluding outliers) of 77.9/100. The standard deviation for this album is 16.6.

My Life In The Bush Of Ghosts favourites

My Life In The Bush Of Ghosts comments

Exactly what I expected from a collaboration between Brian Eno and David Byrne, which is to say that this is nothing short of great. My Life in the Bush of Ghosts has Byrne's fondness for weird funk rhythms and Eno's clear artistic vision. I also don't think sampling was used like this, if at all, in 1981. I've not heard too much buzz about this album, which is sad because I think it's fantastic and fun to listen to.

Also, I'd like to point out that the 2006 artwork for this album sucks and the original cover is way better.

Favorite Tracks:Help Me Somebody, The Jezebel Spirit

I really did not see this coming. Of course there is a relationship with "Remain in Light" by TH, but the combined talent of Eno / Byrne makes this album the best and most innovative music of 1981. The processing of samples (tape loops, because digital technology was not yet available) is extraordinary. Feverish. The voices of the outside world merge seamlessly with the haunting music.

Created in a pre-digital world and somehow manages to be both creepy and funky at the same time.

Strange, but interesting music. If you're a fan of Brian Eno or David Byrne's music, check this one out.

With its unrelenting combination of funk, electro, middle-eastern & rock music, Eno & Byrne had created "the sound of the future"; an experimental, avant-garde album "poppy" enough to appeal to wider audiences. A brilliant, worldly piece of art.

Brilliant and inventive. Good to really listen to and great background music too. A great collaboration.

Wonderful sample driven pastiche heavily influenced by African music and inspired by the novel of the same name. Eno and Bryne are at their peak and this is virtually as good as Remain in Light. 18 track extended cd every bit as pleasurable listening as the original and maybe preferable as it includes tracks slated that were omitted due to legal issues over samples holding up the album's release and subsequent recordings replacing them. This would have sounded like nothing else at the time.

Your feedback for My Life In The Bush Of Ghosts