Faith (studio album) by The Cure 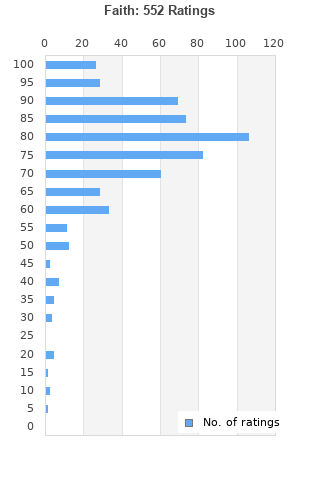 Faith is ranked 7th best out of 37 albums by The Cure on BestEverAlbums.com.

The best album by The Cure is Disintegration which is ranked number 34 in the list of all-time albums with a total rank score of 30,139. 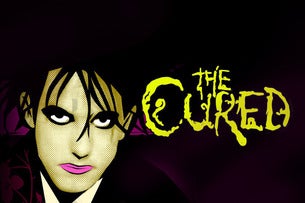 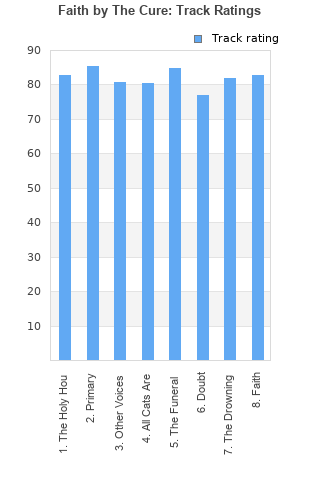 Rating metrics: Outliers can be removed when calculating a mean average to dampen the effects of ratings outside the normal distribution. This figure is provided as the trimmed mean. A high standard deviation can be legitimate, but can sometimes indicate 'gaming' is occurring. Consider a simplified example* of an item receiving ratings of 100, 50, & 0. The mean average rating would be 50. However, ratings of 55, 50 & 45 could also result in the same average. The second average might be more trusted because there is more consensus around a particular rating (a lower deviation).
(*In practice, some albums can have several thousand ratings)
This album is rated in the top 4% of all albums on BestEverAlbums.com. This album has a Bayesian average rating of 77.4/100, a mean average of 76.5/100, and a trimmed mean (excluding outliers) of 77.5/100. The standard deviation for this album is 14.9.

A very dark record which is demonstrated perfectly on the title track which is a perfect album closer as well. Every other song on Faith continues this theme making it such a consistently amazing album. The lyrics on this album also allow for deeper inspection and is one of the highlights of the album. Tolhurst and Gallup also deserves a lot of recognition as the drum work and bass really set the tone for every song and create this ominous, moody atmosphere throughout. In addition, Robert Smith's lyrics and vocal point are just perfect and make the album the masterpiece that it is.

Cannot decide between this and Pornography. Both are masterpieces of the darkest and the most "goth" Cure period. Holy Hour against One Hundred Years, All Cats Are Gray against A Strange Day and so on...

One of their earliest albums, this may be their best. Not bloated and overlong like some of their later "masterpieces" (e.g. Disintegration, Kiss Me Kiss Me Kiss Me), this album reveals the genius of the band, and especially Robert Smith. Lovely and svelte, from front to back. Bravo!

This is my favourite of the earlier darker records. It's consistent all the way through with stunning moments such as, the holy hour, all cats are grey, and the title track. I always found, seventeen seconds, a little uneven, but this is right on it from start to finish. A great band record, when The Cure were still a band and not a Robert Smith solo project.

Dark and moody, this is The Cure as non-fans imagine them after looking at a picture of Robert Smith. Best song is between the surprisingly frantic "Primary" and "All Cats Are Grey".

One of the greatest Gothic Rock albums of all time, the title track is especially powerful.

Turn off the lights, and put your headphones on !! MESMERIZING

flat, hypnotic, gloomy.
not consistently as good as seventeen seconds - but still a cool goth-record.

Your feedback for Faith