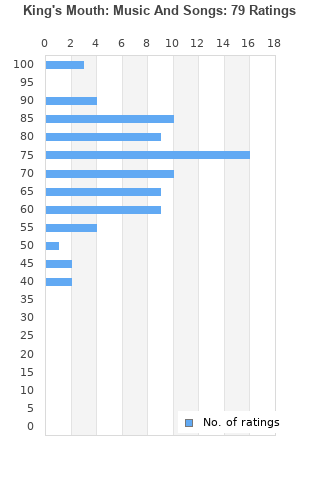 King's Mouth: Music And Songs is ranked 14th best out of 46 albums by The Flaming Lips on BestEverAlbums.com.

The best album by The Flaming Lips is The Soft Bulletin which is ranked number 107 in the list of all-time albums with a total rank score of 15,208.

Listen to King's Mouth: Music And Songs on YouTube 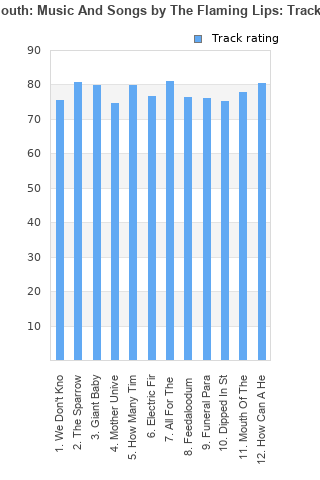 Rating metrics: Outliers can be removed when calculating a mean average to dampen the effects of ratings outside the normal distribution. This figure is provided as the trimmed mean. A high standard deviation can be legitimate, but can sometimes indicate 'gaming' is occurring. Consider a simplified example* of an item receiving ratings of 100, 50, & 0. The mean average rating would be 50. However, ratings of 55, 50 & 45 could also result in the same average. The second average might be more trusted because there is more consensus around a particular rating (a lower deviation).
(*In practice, some albums can have several thousand ratings)
This album has a Bayesian average rating of 73.0/100, a mean average of 72.9/100, and a trimmed mean (excluding outliers) of 72.9/100. The standard deviation for this album is 12.6.

An album which again fits so perfect into the music of the flaming lips. It’s a fairy tale for adults , so beautiful narrated by Mick Jones . It’s great music , hope we one day see the music as a play or short film

Unique. Especially with all the hiphop and pop music that is released nowadays, in 2019. The 12 songs sound and feels like it is created in one piece. The narrative flow through the album really drags you into the music.

The narration sounded good on the first listen. But for a Brit like myself Mick Jones' voice just sounds funny, like a bloke at the chip shop telling you about his dreams. I'd like to think they would release a version without, but they seemed so pleased to get him on the record I doubt it.
I wish they had thought a bit more about the story as well, it doesn't have much of a narrative flow. The album also doesn't have the same variety of style as Yoshimi.
Still probably my favourite album of the year.

I had no idea what to expect and that's a really special thing in modern music. A really sweet record.

A very very good album. I hadn't listened to it, even though I'm a big fan of the Flips because of the nature of the project, but it really is a nice piece and step in their career. As a comment below puts its, it's a return to form. This sounds kinda like their late 90's, early 2000's era, which is my favorite era for this band.

Not bad, but certainly not up there with their best and it would have been so much better without the disruptive narration by Mick Jones. Still yeah, good, but nothing earth shattering.

Your feedback for King's Mouth: Music And Songs