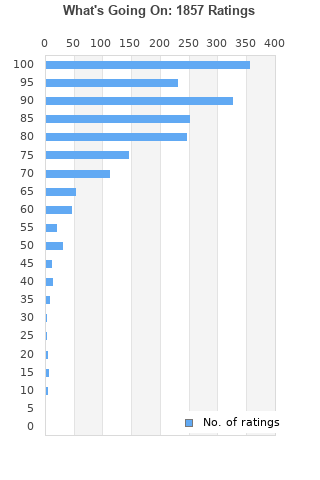 LP Marvin Gaye What's Going On MoFi ONE STEP 2x 45rpm Vinyl Limited Edition MFSL
Condition: New
Time left: 8h 12m 23s
Ships to: Worldwide
$236.00
Go to store
Product prices and availability are accurate as of the date indicated and are subject to change. Any price and availability information displayed on the linked website at the time of purchase will apply to the purchase of this product.  See full search results on eBay

What's Going On is ranked as the best album by Marvin Gaye.

Let's Get It On: Tribute To Marvin Gaye
The Railhead at Boulder Station Hot, Las Vegas, United States. 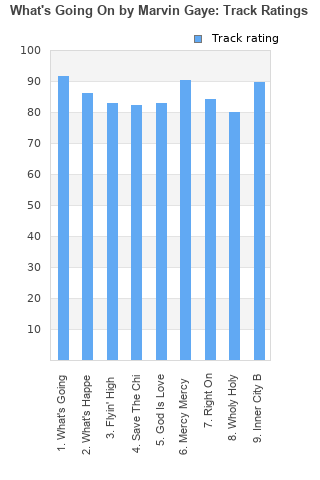 Rating metrics: Outliers can be removed when calculating a mean average to dampen the effects of ratings outside the normal distribution. This figure is provided as the trimmed mean. A high standard deviation can be legitimate, but can sometimes indicate 'gaming' is occurring. Consider a simplified example* of an item receiving ratings of 100, 50, & 0. The mean average rating would be 50. However, ratings of 55, 50 & 45 could also result in the same average. The second average might be more trusted because there is more consensus around a particular rating (a lower deviation).
(*In practice, some albums can have several thousand ratings)
This album is rated in the top 1% of all albums on BestEverAlbums.com. This album has a mean average rating of 84.0/100. The trimmed mean (excluding outliers) is 85.2/100. The standard deviation for this album is 14.5.

Love the album. Shows the great abilities of Marvin Gaye. I loved Marvin Gaye before i know this album. Before i found that Album i knew he is a great singer.

Essential album, one of the best of all time

Great production, Marvin's vocals are superb, great backing musicians and socially aware lyrics. But I don't like listening to it, it just floats along in the background, not demanding my attention. I prefer albums from Alexander O'Neil and Luther Vandross.

It's a pretty good album, but has been pretty overrated by critics. Gaye's vocals are as always on point.

I can appreciate this album for its production, the vocals, and the strong backing musicians, as well as its historical importance. Unfortunately, every time I listen to this album it tends to become background music. While it is solid, I find something missing.

I'll get pretty bored listening to this. It's got beautifull lyrics, and it sounds very ahead of it's time, but that's about it for me

I've never been able to completely love this album, but that could change over time. The opening track is definitely one of my favourite of Marvin's, and his voice, as always, gives me chills. A great album without question.

By far, my favorite album from Mr. Gaye. Best songs: What's Goin' On, Inner City Blues, Mercy Mercy Me. Truly, one of the early 70's classics.

Your feedback for What's Going On