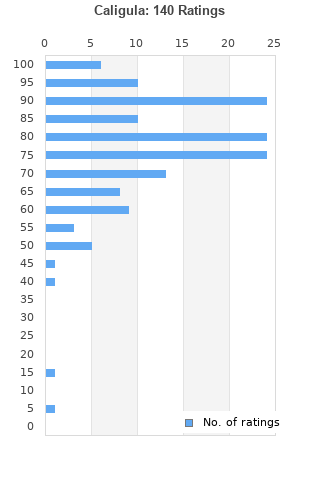 Lingua Ignota ‎Caligula 2x Vinyl LP Record Darkwave Noise Industrial Metal! NEW!
Condition: New
Time left: 3d 6h 7m 37s
Ships to: Worldwide
$45.69
Go to store
Product prices and availability are accurate as of the date indicated and are subject to change. Any price and availability information displayed on the linked website at the time of purchase will apply to the purchase of this product.  See full search results on eBay

Caligula is ranked as the best album by Lingua Ignota. 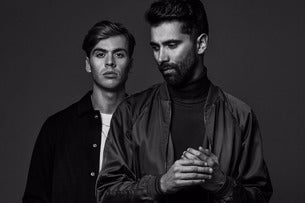 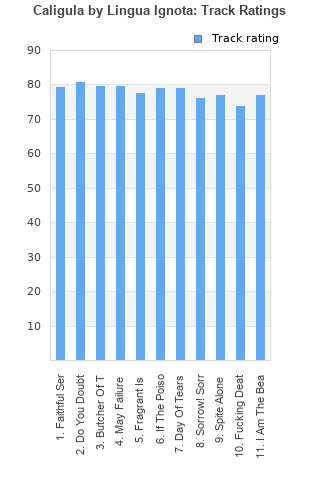 Rating metrics: Outliers can be removed when calculating a mean average to dampen the effects of ratings outside the normal distribution. This figure is provided as the trimmed mean. A high standard deviation can be legitimate, but can sometimes indicate 'gaming' is occurring. Consider a simplified example* of an item receiving ratings of 100, 50, & 0. The mean average rating would be 50. However, ratings of 55, 50 & 45 could also result in the same average. The second average might be more trusted because there is more consensus around a particular rating (a lower deviation).
(*In practice, some albums can have several thousand ratings)
This album is rated in the top 4% of all albums on BestEverAlbums.com. This album has a Bayesian average rating of 77.5/100, a mean average of 76.8/100, and a trimmed mean (excluding outliers) of 77.9/100. The standard deviation for this album is 15.2.

At the end of last year I’d been dreaming up a piece on Lingua Ignota (real name Kristin Hayter) and female subjectivity in metal and its subgenres. And who knows, maybe at some point it will see the light of day. But for now, here is as good as any place to let some of those half-formed ideas unfurl themselves.

Laying claim to an authentically ‘female’ voice in the context of Hayter’s music is more than just a rhetorical gimmick, since it was a voice that was for a long time forced into silence. A survivor of domestic violence, Hayter was embedded within the Rhode Island noise scene but for several years was prevented from ever performing her music at the threat of an abusive ex-partner. Escaping the relationship, Hayter found herself frustrated at the coping strategies suggested by books for abuse survivors, strategies she felt “enforced patriarchal models of civilised femininity”. Hayter didn’t want to serenely accept her suffering, she wanted to rage at its injustice. Lingua Ignota was born.

Heavy metal’s relationship with explicit content has always been something that intrigues me. Much of the genre feels pulled in two directions at once, in that its ethos wants to identify with horror, yet more often that not, the musicians’ own morbid fascination stems from the luxury of having little to no brushes with genuine human suffering (Metallica wrote this zinger about living in a sanatorium - “They keep me locked up in this cage/Can't they see it's why my brain says ‘rage’?” - after watching One Flew Over The Cuckoo’s Nest).

It’s in contrast to these vapid estimations at true horror that Hayter’s power as a songwriter lies. Metal has a rich history of male provocateurs describing sadistic violence upon women under the guise of shock value; Hayter repurposes this language to convey the much more frightening prospect of being the one undergoing that violence.

Though I have tried to voice Lingua Ignota, the best I can do is gesture towards the real thing. I’ll instead leave you with these words from Hayter herself:

"I don't find most of the graphic depictions of (forgive my language here) 'sending this dumb slut back to hell hearing her final screams as my throbbing erection pounds her maggot-filled cunt' upsetting to my feminine sensibilities, most of it isn't even well-executed enough to be taken seriously. I just find that it occupies this weird space of being simultaneously very loaded and totally obsolete, especially when we consider that none of these guys are actually sodomising female corpses in their free time. So my thoughts were to flip this whole paradigm and to try to make it meaningful, to reframe extreme imagery for survivors of violence, upon whom very dark shit has actually been visited."

The blood-curdling screams are too off-putting for me. There is an exceptional amount of emotion being expressed throughout the album which is no small feat. The vocals are impressive at points and the sometimes-sparse, sometimes-all-encompassing backing does its job to add to the aesthetic of the album. It's just that I can't get past the screams. They're far and away the most noticeable aspect of the album and it's too hard for me to look past them to enjoy any of the other sounds on the album. I'm not unexposed to abrasive and hard-to-like music, this is just too much for me.

This album is so powerful with venom and pain running through its veins , the screaming feels real , the lyrics sound convincingly real , and the album leaves a lasting impression long after "I AM THE BEAST" closes proceedings out

I'm not really sure if i can really review someone's expression of pain but I'm going to try.
Caligula succeeds in letting the the listener feel the immense pain and hatred it is trying to convey. I think the liturgically style of singing lends itself self really well. I think the writing is memorable especially on " Fragrant Is My Many Flower'd Crown".
I do believe that this album does have some flaws. The blown out bass on " May Failure Be Your Noose" sounded like a boosted bass on a youtube poop video. That made me laugh and that is most certainly not what the album wanted. The sample of Lars Ulrich eating a sandwich bitterly(Not making this up) also feels really out of place. Lastly, about half way through you sort of become prepared for the raw torment and it doesn't really feel as powerful. An escalation or change musically might have helped keep the listener on edge.
I really hoped this album helped her heal.

It's the 5th album on my 2019 chart, and I could very easily see it at number 1 after several more listens. Relentless and also very beautiful at parts. A big fan of Darkwave, and this is Darkwave with emphasis on "dark". Loveit

Neoclassical Darkwave! It's not everyone's cup of tea, and that's okay. I definitely find this album to be pretty original, and extraordinarily heartfelt. Her vocals are amazing, even successfully dabbling in some throatsinging on this record.

As profoundingly disturbing as this album is, I genuinely hope she gets good help. Fast.

Your feedback for Caligula