The Furnaces Of Palingenesia (studio album) by Deathspell Omega 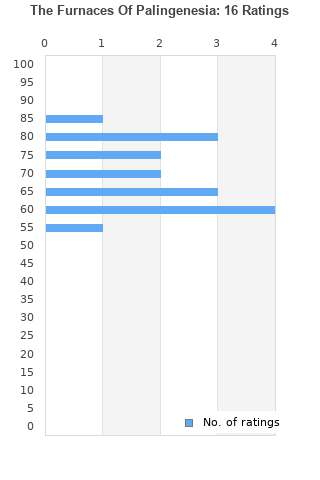 DEATHSPELL OMEGA THE FURNACES OF PALINGENESIA - LP Mint / Mint
Condition: New
Time left: 3d 21h 35m 59s
Ships to: Worldwide
£26.99
Go to store
Product prices and availability are accurate as of the date indicated and are subject to change. Any price and availability information displayed on the linked website at the time of purchase will apply to the purchase of this product.  See full search results on eBay

The Furnaces Of Palingenesia is ranked 4th best out of 10 albums by Deathspell Omega on BestEverAlbums.com. 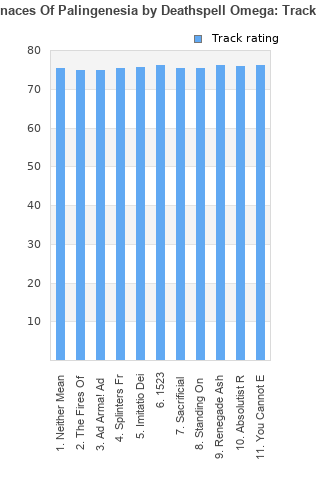 The Furnaces Of Palingenesia rankings

The Furnaces Of Palingenesia collection

The Furnaces Of Palingenesia ratings

Rating metrics: Outliers can be removed when calculating a mean average to dampen the effects of ratings outside the normal distribution. This figure is provided as the trimmed mean. A high standard deviation can be legitimate, but can sometimes indicate 'gaming' is occurring. Consider a simplified example* of an item receiving ratings of 100, 50, & 0. The mean average rating would be 50. However, ratings of 55, 50 & 45 could also result in the same average. The second average might be more trusted because there is more consensus around a particular rating (a lower deviation).
(*In practice, some albums can have several thousand ratings)
This album has a Bayesian average rating of 70.1/100, a mean average of 67.9/100, and a trimmed mean (excluding outliers) of 67.9/100. The standard deviation for this album is 8.6.

The Furnaces Of Palingenesia favourites

The Furnaces Of Palingenesia comments

It is really difficult to review the album of a neo-nazi group. When I discovered Deathspell Omega, I did not know they were fucking white supremasists neo-nazi. I'm not a big fan of black metal but I thought it was really cool that a French band was considered one of the best black metal bands. Now that I know, I hate them. So I'm going to write a paragraph where I expose the problem with DsO and another where I will objectively criticize their album.

DsO do the same thing that Drudkh, they try to hide their nauseating racism by claiming a "hipster racism" or "freedom of speech" ... it's really one of the most annoying arguments of the NSBM scene and DsO stans. The French NSBM scene is actually in expansion with band like Alcest, Antekhrist, Peste Noir... They claim to be first Satanists and then nationalists, but Satanism is just a codeword for neo-nazi. For those who forgive the NSBM because wé forgive Satanism, has Satanism decimated millions of people in Europe? No. So fuck DsO and fuck all that fucking Nazi Hipster that trivializes the fact of being a Nazi.

Musically, what is Deathspell Omega in 2019? Yes, "The Synarchy of Molten Bones" was boring and disappointing. "Paractelus" was exellent but since that album, the band has started the decent. Black Art is still part of the genes of DsO, they know how to consciously destroy your brain to instil loss of consciousness. Deathspell Omega is getting older, but it does not age so badly in fact. It's still a good effort for a band that has released several Black Metal classics in the past. I won't re-listened this album because I won't fuck with nazi but I have To say that this music is good.

Your feedback for The Furnaces Of Palingenesia