Dangerously In Love (album) by Beyoncé 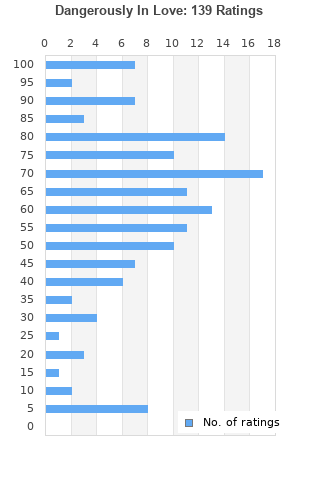 Dangerously In Love is ranked 4th best out of 9 albums by Beyoncé on BestEverAlbums.com.

The best album by Beyoncé is Lemonade which is ranked number 573 in the list of all-time albums with a total rank score of 3,277. 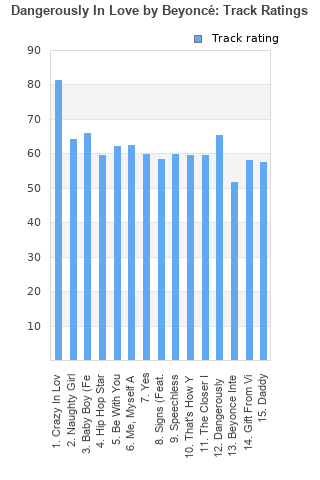 Outliers can be removed when calculating a mean average to dampen the effects of ratings outside the normal distribution. This figure is provided as the trimmed mean. A high standard deviation can be legitimate, but can sometimes indicate 'gaming' is occurring. Consider a simplified example* of an item receiving ratings of 100, 50, & 0. The mean average rating would be 50. However, ratings of 55, 50 & 45 could also result in the same average. The second average might be more trusted because there is more consensus around a particular rating (a lower deviation).
(*In practice, some albums can have several thousand ratings)
This album has a mean average rating of 59.0/100. The trimmed mean (excluding outliers) is 59.2/100. The standard deviation for this album is 24.4.

great album with great production, the only downside to it was the live performances that have nothing to do with how she performs nowadays

For a debut album, "Dangerously in Love" is pretty darn good! Some of the songs may sound a little goofy, but it was 2003 anyways. The highlights of the album include the title track, "Crazy In Love", and "The Closer I Get to You". The hate on this album is mainly due to it being her highest selling record to date.

Basically what the others said - a huge album at the time, but her subsequent work is much better.

Her debut solo album is the worst of her 5 studio albums. Apart from Crazy In Love & Dangerously In Love and possibly Me Myself I the album is not up to her high standards.

Nice enough, but a lot of really samey tracks.

Crazy In Love is the best here.

Your feedback for Dangerously In Love