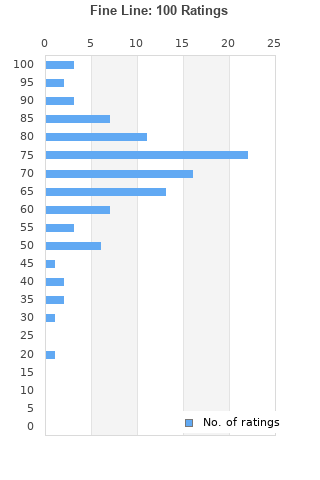 Harry Styles, Fine Line [New CD, 2019] + Free Shipping
Condition: Brand New
Time left: 4h 42m 15s
Ships to: Worldwide
$7.80
Go to store
Product prices and availability are accurate as of the date indicated and are subject to change. Any price and availability information displayed on the linked website at the time of purchase will apply to the purchase of this product.  See full search results on eBay

Fine Line is ranked 2nd best out of 2 albums by Harry Styles on BestEverAlbums.com.

The best album by Harry Styles is Harry Styles which is ranked number 5882 in the list of all-time albums with a total rank score of 213. 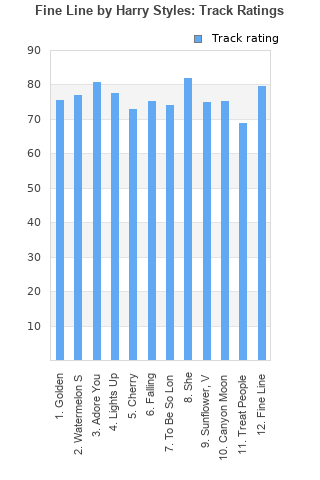 Rating metrics: Outliers can be removed when calculating a mean average to dampen the effects of ratings outside the normal distribution. This figure is provided as the trimmed mean. A high standard deviation can be legitimate, but can sometimes indicate 'gaming' is occurring. Consider a simplified example* of an item receiving ratings of 100, 50, & 0. The mean average rating would be 50. However, ratings of 55, 50 & 45 could also result in the same average. The second average might be more trusted because there is more consensus around a particular rating (a lower deviation).
(*In practice, some albums can have several thousand ratings)
This album has a mean average rating of 69.0/100. The trimmed mean (excluding outliers) is 70.5/100. The standard deviation for this album is 14.0.

My friend recommended this to me, so I felt a slight sense of obligation to listen to it, but honestly it surprised me. It's a pretty fun summer album with some nice melodies and instrumental variety. I ended up enjoying it quite a bit.

Some good songs (including the hit Adore you), but the rest not so good in quality. I like the album though.

Harry Styles returns with his sophomore effort and somehow manages to keep the high quality and catchy rock tune from his debut solo album, while at the same time sounding modern and polished in his modern rock sound. The instrumentation is more varied this time around and the songwriting stays at a high level.

The ballads are more bold this time around, the fast songs easier to dance to. Styles continues his successful experimentation and succeeds at keeping the album interesting thanks to varying the style and tempo of his songs. Catchy tunes and emotional stories help as well.

He tried to make a 'mature' good pop album that could like his old One Direction fans (young girls). 'Adore you' is a highlight. It works a bit.

The first one is pretty good, but this is even better. Also can see more influence from Paul McCartney on this one, which is great.

If you want to feel how long a decade is play One Direction's 2011 hit 'What makes you beautiful' and then give this a spin. On his sophomore record Harry Styles has cemented his move away from the lowest common denominator pop music that his former band defined just a few years ago. Like his debut, we have a carefully made and thoughtful album that still falls a bit short of where his music could be. In the case of 'Fine Line' things go well most of the way through but seem to start tailing off in the last few tracks.

The stand out track here is probably 'Lights Up', though there's a few contenders. It's exceptionally rare for a pop track to be so unpredictable in where it's going next. From the light guitars that fade in at the start you don't see the piano breaks or backing singer heavy chorus coming, but instead of coming across as disjointed it feels like clear movements in the same song. What's even more impressive is it does it all in less than 3 minutes. Another of the most ambitious tracks here is the 6 minute 'She'. From the start you have really intriguing lyrics like "A man drops his kids off at school, and thinks of you, like all of us do". These clear up once you're mid way through the track and instead your attention goes to the strange instrumental flourishes and then that guitar solo. It's some of the most exciting guitar driven pop we've heard in years.

Unfortunately after this things get substantially duller. The vocals on 'Sunflower' don't sound all that great and the lyrics don't really raise them up. Canyon's a bit too retro. Where a lot of the tracks here feel like they're looking to the past to help create pop music of the future, the sound on 'Canyon' has no legs to have any impact (the whistling is really the last nail in the coffin). 'Treat People With Kindness' is a more experimental failure, the vocals really don't go together and the overall sound doesn't fit very well on the album, but I'd rather see artists take risks than churn out the same kind of stuff over & over. The title track fixes things a bit and acts as a nice closer but I'd rather have just seen the previous 3 tracks scrapped to make for a shorter but better album.

Overall though 'Fine Line' really confirms that Harry Styles' solo career is more than a flash in the pan with 'Sign of the Times'. The raw vocals would be great already, but the subtle vocal effects make them even better. The guitar work also goes great with them and most tracks are well structured and written. Let's just hope that he can keep building on this kind of quality to give us a really brilliant album next time around.

Your feedback for Fine Line