As The Love Continues (studio album) by Mogwai 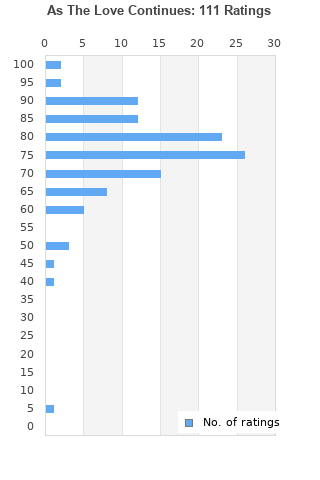 Mogwai - As The Love Continues (NEW 2 VINYL LP)
Condition: New
Time left: 16h 50m 40s
Ships to: Worldwide
£22.99
Go to store
Product prices and availability are accurate as of the date indicated and are subject to change. Any price and availability information displayed on the linked website at the time of purchase will apply to the purchase of this product.  See full search results on eBay

As The Love Continues is ranked 12th best out of 28 albums by Mogwai on BestEverAlbums.com.

The best album by Mogwai is Mogwai Young Team which is ranked number 810 in the list of all-time albums with a total rank score of 2,301. 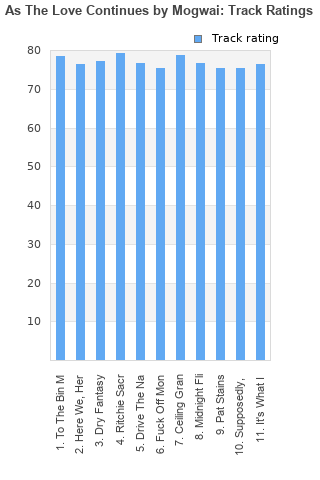 #
Track
Rating/Comments
1.
To The Bin My Friend, Tonight We Vacate Earth
Rating: 79 (16 votes)Comments:

As The Love Continues rankings

As The Love Continues collection

As The Love Continues ratings

Rating metrics: Outliers can be removed when calculating a mean average to dampen the effects of ratings outside the normal distribution. This figure is provided as the trimmed mean. A high standard deviation can be legitimate, but can sometimes indicate 'gaming' is occurring. Consider a simplified example* of an item receiving ratings of 100, 50, & 0. The mean average rating would be 50. However, ratings of 55, 50 & 45 could also result in the same average. The second average might be more trusted because there is more consensus around a particular rating (a lower deviation).
(*In practice, some albums can have several thousand ratings)
This album is rated in the top 7% of all albums on BestEverAlbums.com. This album has a Bayesian average rating of 76.3/100, a mean average of 75.8/100, and a trimmed mean (excluding outliers) of 76.7/100. The standard deviation for this album is 12.8.

As The Love Continues favourites

As The Love Continues comments

As far as Mogwai albums are concerned, it may not be groundbreaking (vocals though....). But the intensity and purpose are felt as much as in any previous work. Mogwai continues to produce very moving post-rock, with tracks like To The Bing My Friend and Drive the Nail almost anthemic.

Quite elegant and wonderful honestly. Sure it's not the greatest they've done but gosh darn it it's very nice.

This is like Pink Floyd level instrumentation. And by that I mean that words aren't needed to express the feelings meant to come from this album. The thing that makes that even more impressive is that the instrumentation on this record isn't nearly as complex as a Floyd record, it's really fairly simplistic. So the fact that it can convey so much emotion with little complexity is super impressive

Relatively straightforward post-rock album. Nothing really new. Plenty of others doing the same stuff at the moment

A typical atmospheric/hypnotic Mogwai album. Nothing surprising or exciting, but enjoyable nonetheless, despite a couple of things I didn't like. At times -admittedly it was sporadic,there were parts it was ok - I felt the rhythm section was somewhat annoying. I can't quite put my finger on it, but I think this had more to do with the production than the instrumentation. Also, the electronic aspects were rather forgettable, not to mention they gave me the impression of going againist the overall direction of the album. The vocals -not that there were many of them - were essentially a non-factor, neither distracting nor adding anything in particular.

Your feedback for As The Love Continues