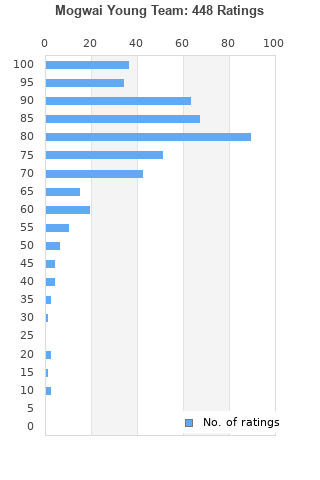 Mogwai Young Team is ranked as the best album by Mogwai. 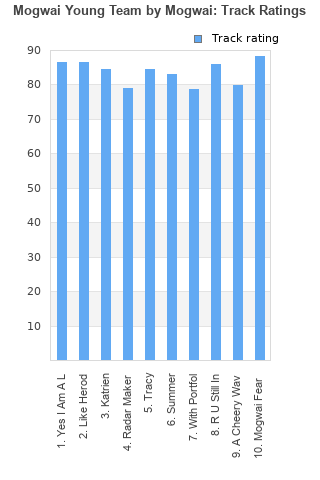 Rating metrics: Outliers can be removed when calculating a mean average to dampen the effects of ratings outside the normal distribution. This figure is provided as the trimmed mean. A high standard deviation can be legitimate, but can sometimes indicate 'gaming' is occurring. Consider a simplified example* of an item receiving ratings of 100, 50, & 0. The mean average rating would be 50. However, ratings of 55, 50 & 45 could also result in the same average. The second average might be more trusted because there is more consensus around a particular rating (a lower deviation).
(*In practice, some albums can have several thousand ratings)
This album is rated in the top 2% of all albums on BestEverAlbums.com. This album has a Bayesian average rating of 80.6/100, a mean average of 79.6/100, and a trimmed mean (excluding outliers) of 80.7/100. The standard deviation for this album is 14.7.

A very strong first half but the second half does lack the punch of the opening tracks. There is a lot of great material on here and while it can get confused amongst the weaker stuff it still shines through on tracks like Tracy. You can picture the vibe and atmosphere they are going for pretty well and they do pull it off to a reasonable extent which creates a very nice album to chill to. That would be the main reason for coming back to this record as it is just so relaxing and easy to listen to that it would be perfect for unwinding. However, it does struggle in terms of quality and depth to keep me engaged for the full run time which does run a little too long as well. Overall, a good post rock album with some great cuts on here but there are better albums in the genre to explore before this one.

Generally a really pleasant listen. Sadly I see tons and tons of unused potential in some of these songs (especially on some on the material in the Deluxe Edition, which I purchased).

While there are a few really amazing gems on here, (mainly "R U Still In 2 It?" and "Tracy", but I also enjoy "Like Herod" and "Mogwai Fear Satan" a lot) many songs aren't developed enough to stand on their own.
While enjoyable, they like to linger too long on one part, without offering much of a pay-off or a development of those musical ideas.

One of the best examples for this is "Young Face Gone Wrong", the first song from the second disk of the Deluxe Version.
It sports a truly amazing melody, which doesn't go anywhere. It just hurts seeing the potential for something I could LOVE, but it going to waste...

...so that song is basically this record in a nutshell.

also: I noticed that the remastered version, which I bought was mixed with EXTREME overbearing low-end. Had to manually adjust the levels on all of those tracks down by about 4dB I'm guessing from top of the head, to get into managable territorys.

I haven't listened to this album in years, I almost forgot how wonderful it is, sometimes it's so beautiful it makes me want to cry. Fav tracks: Tracy, R u Still in 2 it.

The first half was mind-blowing. The second half kind of bored me. I'm definitely going to give it a few more spins though. The overall sound is wonderful.

Dark, atmospheric and emotional. One of the best post rock albums ever.

Wow. Just wow. Mogwai's debut is a post-rock masterpiece. Godspeed You! Black Emperor delivers a more transcending sound, this one is more descending feel. What I mean by that is that it brings you more centered and feel like one with everything around you. Powerful album.

I love a band that can be both wistfully beautiful and crushingly powerful within the same album. The amount of different sounds they tackle on this album is staggering. The playing is fantastic especially the drums. Clearly Like Herod and Mogwai Fear Satan are the big guns here if you’re thinking purely crescedo- core Post Rock with their head banging payoffs. Like Herod in particular reminds me at times of Sister-era Sonic Youth, Godflesh, and a more Kim Thayil focused Soundgarden. But the other tracks are killer too. Katrien is like Velvet Underground’s the Gift set to ferocious post rock and the drumming is superlative.
Then there’s Radar Maker’s haunting, emotive piano and Summer’s Slint & Filosofem-style Burzum mashup. Tracy is simply drop dead gorgeous, and With Portfolio stuns with a white noise loop that seems to shoot from speaker to speaker. Then R U Still In It finally answers the question of what would happen if either Kurt Wagner (Lambchop) or Stuart Staples (Tindersticks) had decided to front a post-rock band. A Cheery Wave sounds like Faith-era The Cure if Robert Smith had been, um.. cheery. Finally, Mogwai Fear Satan recalls MBV era Loveless and probably most likely influenced Justin Broadrick’s Jesu. That’s a lot of ground to cover in just one hour. Highly Recommended! ****

Your feedback for Mogwai Young Team