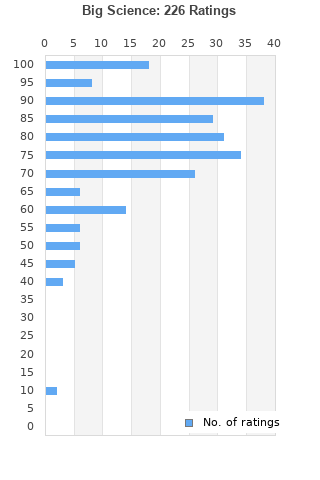 Big Science is ranked as the best album by Laurie Anderson.

Tickets from Ticketmaster Get tickets
May
22
Sun
13:00 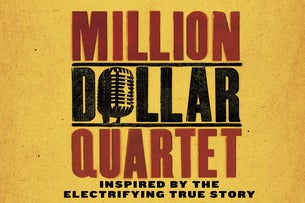 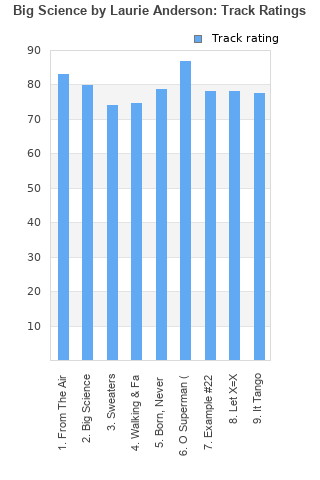 Rating metrics: Outliers can be removed when calculating a mean average to dampen the effects of ratings outside the normal distribution. This figure is provided as the trimmed mean. A high standard deviation can be legitimate, but can sometimes indicate 'gaming' is occurring. Consider a simplified example* of an item receiving ratings of 100, 50, & 0. The mean average rating would be 50. However, ratings of 55, 50 & 45 could also result in the same average. The second average might be more trusted because there is more consensus around a particular rating (a lower deviation).
(*In practice, some albums can have several thousand ratings)
This album is rated in the top 3% of all albums on BestEverAlbums.com. This album has a Bayesian average rating of 78.5/100, a mean average of 78.1/100, and a trimmed mean (excluding outliers) of 78.7/100. The standard deviation for this album is 15.3.

Took me a few listens to completely appreciate this strangely beautiful album. First listen I'm all like what the heck am I listening to? Haha but now I love it's uniqueness and charm.

A quirky little album. Big science, is full of brilliant little stories and characters. It's amazing to think what a massive hit, oh superman, was, considering it's not exactly chart material. It's all lovely and atmospheric. Still, totally unique.

without the background history and the total packet of the art performance the muusic appears exotic, strange and annoying. not my cup of tea.

Laurie Anderson is not just a musician, but also a performance artist. Now, while I have no trouble defending the music on Big Science, I am well aware that it was originally presented (and arguably is meant to be presented) as a full performance piece, with the music only being a portion. Just to clarify, Big Science makes it onto my list purely by the merit of its music, and not any performance art with which it is associated. Now as for the music in question, holy shit. I mean like seriously. Minimalist and monochrome sure, and with a shit-ton of spoken word samples, but emotionally evocative and deeply unsettling in equal proportion as well. Laurie Anderson, with the hi-tech tools at her disposal, can engender the height of emotional response from the listener with the fewest possible compositional pieces by arranging them in a way that is "perfect", by the merit of it feeling slightly off-kilter, just enough so that even the most non-musical pieces become memorable

This avant-garde classic is essentially a subtle exploration of the banality of the mechanized consumer society charateristic of the modern metropolis.The songs are sketches of life within an ordered society - slow, repetitive and colloquial, halfway between the hypnotic and the dreamlike. Layers of filtered vocals, spoken more than sung, hint at a future without emotion or feeling.

Your feedback for Big Science