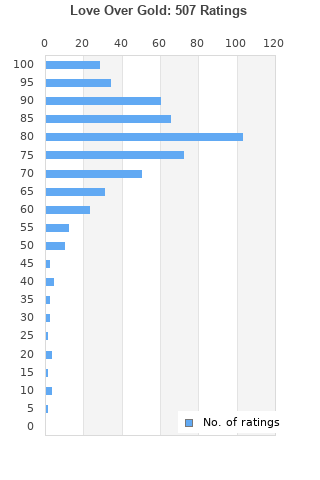 Love Over Gold is ranked 4th best out of 15 albums by Dire Straits on BestEverAlbums.com.

The best album by Dire Straits is Brothers In Arms which is ranked number 226 in the list of all-time albums with a total rank score of 8,338. 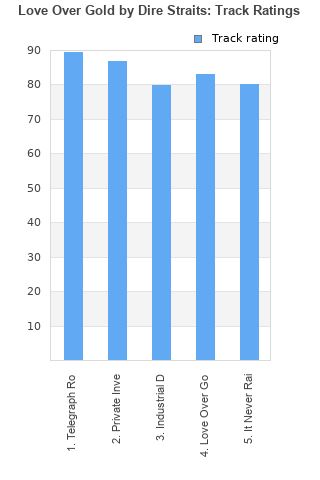 Rating metrics: Outliers can be removed when calculating a mean average to dampen the effects of ratings outside the normal distribution. This figure is provided as the trimmed mean. A high standard deviation can be legitimate, but can sometimes indicate 'gaming' is occurring. Consider a simplified example* of an item receiving ratings of 100, 50, & 0. The mean average rating would be 50. However, ratings of 55, 50 & 45 could also result in the same average. The second average might be more trusted because there is more consensus around a particular rating (a lower deviation).
(*In practice, some albums can have several thousand ratings)
This album is rated in the top 3% of all albums on BestEverAlbums.com. This album has a Bayesian average rating of 78.2/100, a mean average of 77.0/100, and a trimmed mean (excluding outliers) of 78.3/100. The standard deviation for this album is 15.7.

Best tracks: Telegraph Road, Private Investigations. Industrial Disease is an oddball song from a different style of an album, that breaks the cohesion markedly.

Telegraph Road is absolutely exceptional and everything after that doesn't really live up to that same level. For those 14 minutes you are treated to some of the very best of Dire Straits and it is the reason I have come back to this album so many times. It just captivates me and the performances on that song are just incredible. The Title Track is the next closest in terms of quality and without it I would skip this album and just listen to Telegraph Road. The other 3 tracks just never clicked with me and I feel like they were elongated just for the sake of it. I find this with most of Dire Straits songs as they just seem to want to keep the song going when it had reached its natural end already. Obviously there are glimpses of quality in the other 3 songs and they are still decent but they just miss the mark for me. Overall, an inconsistent album that is saved by the 14 minute epic that might be Dire Straits best ever song.

I think this is what most people hear when they listen to Bruce Springsteen.

Well, I love it now so I guess I'm officially boring. I love all their stuff apart from bits of brothers in arms. Yep, old and boring. Shoot me if I start to dig Phil Collins.

Love the first two albums and this also has some very good tracks on it. One of the big differences for me is in the production. On this one Knopfler takes control of production and it's very polished and hitting that sound that would conquer the world and test your new cd player to the max. Give me the first two anyday, even though this has plenty merits, it's too shiny and adult for it's own good which is a shame as there is some of their best stuff under the artifice.

"I don't use to listen dire straits regulary but every time i spin them i always realize they are one of the greatest bands ever."

Translation: "I don't particularly enjoy it, but it ticks all my boxes of what I think good music is."

My second favorite after, wait for it.... their second album.

Your feedback for Love Over Gold