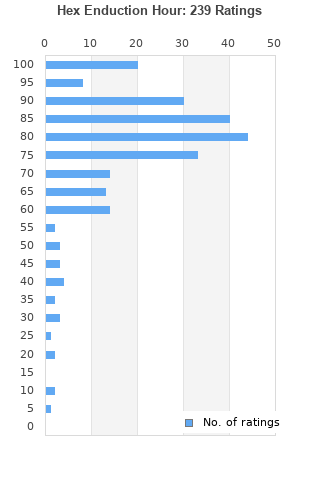 Hex Enduction Hour is ranked 2nd best out of 50 albums by The Fall on BestEverAlbums.com.

The best album by The Fall is This Nation's Saving Grace which is ranked number 963 in the list of all-time albums with a total rank score of 1,924. 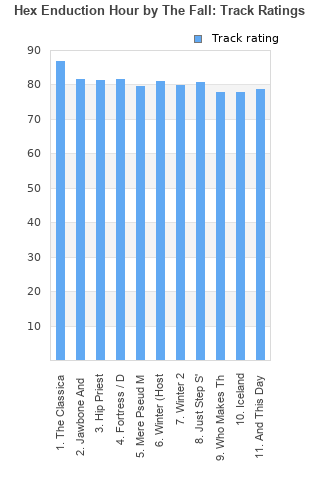 Rating metrics: Outliers can be removed when calculating a mean average to dampen the effects of ratings outside the normal distribution. This figure is provided as the trimmed mean. A high standard deviation can be legitimate, but can sometimes indicate 'gaming' is occurring. Consider a simplified example* of an item receiving ratings of 100, 50, & 0. The mean average rating would be 50. However, ratings of 55, 50 & 45 could also result in the same average. The second average might be more trusted because there is more consensus around a particular rating (a lower deviation).
(*In practice, some albums can have several thousand ratings)
This album is rated in the top 3% of all albums on BestEverAlbums.com. This album has a Bayesian average rating of 78.4/100, a mean average of 77.2/100, and a trimmed mean (excluding outliers) of 78.6/100. The standard deviation for this album is 17.4.

Even if it is made within the context of an ironic joke, the racial slur in the opening track still makes me wince with every listen. Aside from that particularly dated moment, this post-punk album keeps as fresh as a daisy. Utterly enthralling.

Oh so sorry Jimmy dread, but my 'review' wasn't actually a 'review' it was 'comment', hence the 'showing all 11 comments', it would have been slightly different else. Your 'reveiw' wasn't particularly constructive either. By the way, good luck with the parallel timeline.

A great Fall album. I still think, Dragnet, is still my favourite but this one is catching up with each listen. A real grower this one.

Widely regarded as the best Fall album, but not necessarily the one to try first for anyone curious enough to dive in. It doesn't have the more commercial appeal of the Brix influenced albums which followed. Although the word 'commercial' in Fall terms still vastly differs from most other band's definition of commercial.

Great post-punk album. I see how influential The Fall was, they made great music, but just great music and pretty influential. It didn't shocked me.

Thought I'd heard this before but I now doubt it as listening now it sounds quite incredible.

Deer Fortress has a great intro.

Your feedback for Hex Enduction Hour