The Number Of The Beast (studio album) by Iron Maiden 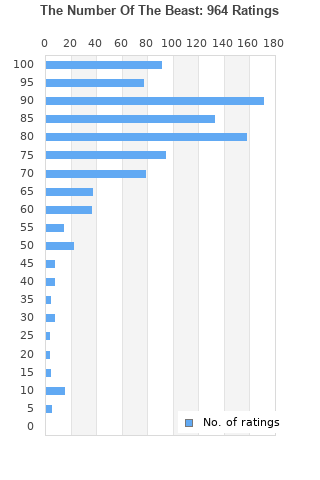 The Number Of The Beast is ranked as the best album by Iron Maiden.

Listen to The Number Of The Beast on YouTube 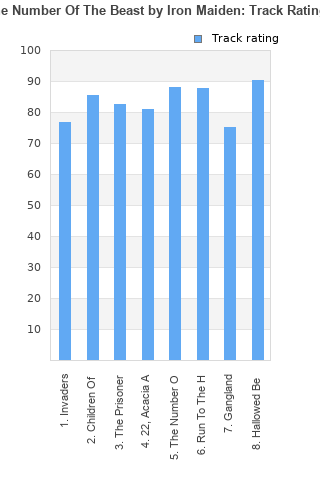 The Number Of The Beast rankings

The Number Of The Beast collection

The Number Of The Beast ratings

Rating metrics: Outliers can be removed when calculating a mean average to dampen the effects of ratings outside the normal distribution. This figure is provided as the trimmed mean. A high standard deviation can be legitimate, but can sometimes indicate 'gaming' is occurring. Consider a simplified example* of an item receiving ratings of 100, 50, & 0. The mean average rating would be 50. However, ratings of 55, 50 & 45 could also result in the same average. The second average might be more trusted because there is more consensus around a particular rating (a lower deviation).
(*In practice, some albums can have several thousand ratings)
This album is rated in the top 2% of all albums on BestEverAlbums.com. This album has a Bayesian average rating of 80.4/100, a mean average of 78.6/100, and a trimmed mean (excluding outliers) of 80.5/100. The standard deviation for this album is 18.1.

The Number Of The Beast favourites

The Number Of The Beast comments

Metal and heavy rock isn't where I normally go but I have started to listen to some of those more iconic albums identified on this site and I am starting to find a bit of a love for this area that has really surprised me. So I'm only listening to this album in Oct 2022 - Run to the Hills and Children of the Damned along with the title track I realised I had heard before, But this album rocks.

This is definitely in top 5 heavy metal records of all time. It contains two metal masterpieces - 22 Acacia Avenue and Hallowed Be Thy Name - these songs are literally perfect, but the rest holds up really well including excellent Number Of The Beast and catchy Run To The Hills. The only weak points for me are chorus of The Prisoner which has not aged very well and Gangland - it is not bad, but in my opinion pointless. Overall, this is peak of NWOBHM and crowning achievement of that era.

Easily one of the most over-rated album in metal history. The instrumentation is the weakest from all the classic Maiden record in the 80s, and the sound is lame; tough Maiden never really understood the importance of having a grand sound in metal, but they usually replaced this issue with great melodies, except here. Only Halloweed by thy Name and Children of the Damned stand to me as worthy of being included in a best Maiden list. Im not even that sold on Dickinsons vocals; he often tries to sound fast and sound aggresive, except he really is not good at sounding aggresive, like at all. Overall, A Piece of Mind is a clear improvement and Powerslave is their true masterpiece.

I can understand how this is one of the best metal albums ever. Still, with childish lyrics and absolutely no nuance to the music, I’m not likely to return to this one.

I don't really know a lot about this genre of music but I absolutely love this album.

Genre-defining album. Definitely their most epic album and up there with their best.

Your feedback for The Number Of The Beast