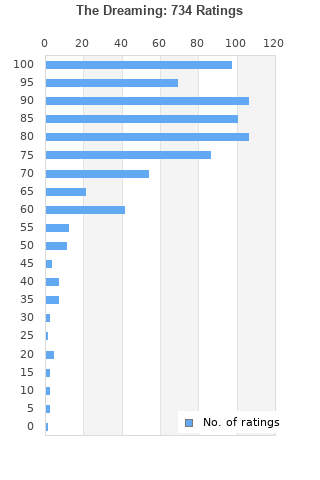 B259: Kate Bush "The Dreaming" EMI Japan EMS-91044 M/M- w/Lyrics & Bio
Condition: Used
Time left: 12h 30m 56s
Ships to: Worldwide
$45.00
Go to store
Product prices and availability are accurate as of the date indicated and are subject to change. Any price and availability information displayed on the linked website at the time of purchase will apply to the purchase of this product.  See full search results on eBay

The Dreaming is ranked 2nd best out of 16 albums by Kate Bush on BestEverAlbums.com.

The best album by Kate Bush is Hounds Of Love which is ranked number 75 in the list of all-time albums with a total rank score of 19,905. 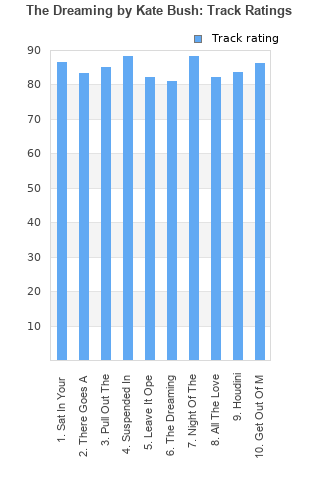 Rating metrics: Outliers can be removed when calculating a mean average to dampen the effects of ratings outside the normal distribution. This figure is provided as the trimmed mean. A high standard deviation can be legitimate, but can sometimes indicate 'gaming' is occurring. Consider a simplified example* of an item receiving ratings of 100, 50, & 0. The mean average rating would be 50. However, ratings of 55, 50 & 45 could also result in the same average. The second average might be more trusted because there is more consensus around a particular rating (a lower deviation).
(*In practice, some albums can have several thousand ratings)
This album is rated in the top 1% of all albums on BestEverAlbums.com. This album has a Bayesian average rating of 81.1/100, a mean average of 80.0/100, and a trimmed mean (excluding outliers) of 81.2/100. The standard deviation for this album is 16.6.

Weird, wild and expressive - words do not do it justice. Breathtaking but also calming, grand yet also detailed, terrifying yet also outstandingly close to the heart. 'The Dreaming' has had me enthralled in its undefinable mystique, every listen carrying you like tumbling down a rabbit hole.

Stories of cockney bank robbers, Aboriginals defending their land from imperial invaders and Harry Houdini, to name a few, sounds absurd when you lay it out like this. But in her hands, Bush weaves everything together with dexterous craft. Everything feels deliberate, the ideas fully realised; it really reflects that she wrote and produced almost everything on here herself.

It's an album for all seasons, all feelings and truly spans the musical spectrum. This is Kate Bush, the queen of avant-garde, at a seminal peak.

I heard it right after the first time I heard Hounds Of Love. I was blown away and desperate to find more music like it. An I was really disappointed at first. I didn't understand it. It sounded weird and way to different to HOL. Those are exactly the reasons I like this album as much as I like it. Solid, innovative and mind-blowing at times, The Dreaming is not only one of the peaks of Kate Bushes career, but also one of the defining albums of the eighties. Hounds Of Love is still my favorite in every way, but now I have a lot of love for this album.

Still kicking myself for not appreciating this as soon as it came out. It was so inventive and non-commercial that it caught fans and critics on the hop. Now I've had nearly 38 years to listen to it I think its her best! The more commercial appeal of the brilliant Hounds of Love gave us a fresh perspective on The Dreaming. An album to get lost in and where you always discover something new.

Kate Bush is an amazing songwriter, but I think this is her arrangement peak. The instrumentation on every track is so interesting and cerebral. And her voice also sounds really great here. The Dreaming is a bit less pop than the rest of her projects, but it's also one of her best.

A good album but not as good as Hounds or The Kick Inside. For me it's the production. Too much high end. Sounds like they lined the studio with tin foil.

Requires multiple listens to understand, and this just may not be certain peoples cup of tea under any circumstance. If you do get even one track on this album, it just may change your life. I'm still trying to come around to certain tracks, though Leave it Open is one of the best songs I've ever heard, personally, and it sounds way ahead of it's time. In her words: "Let the weirdness in."


"The Dreaming", all Kate Bush fans know, is the Grail. An ambitious album, complex, sometimes difficult, completely out of step with the time (1982). Commercial failure, the record has nevertheless become a cult object with the years and all fans agree today to admit that it is the best album of her discography. This is the most rich and original album of Kate Bush: arrangements, texts, voices and moods are surprising and perfect. A record that becomes timeless. Only listening after another listening, can detect all its power of spell. I fell in love with this complex musical journey and it's for life. Kate Bush is simply my favorite female singer of all time.

Surely, creativity is its own reward. But when it moves and startles us like "The Dreaming" does, it rises to another level - a place to be aspired to by all Creative Artists. Every song on this album has integrity and its own inner logic. Very happy to have found this, rather late. Thank you Kate!

Written, produced and performed by Kate Bush. Impressive to say the least, but when you produce everything by yourself, please make sure that it doesn’t refrain you. It sounds a bit like it did on this album. The production is relatively sparse, and you might say that’s intentional and I would agree, but the reason for that decision certainly had something to do with the fact that she forced herself to do everything alone. A bit of collaboration never killed anyone.
Still, I love the album. It sounds like a departure from her previous sounds, she made the best of a self-imposed tough situation.

A bizarre album even for today's ears. Unstable, unpredictable but remarkably cohessive and fascinating nonetheless. Probably Bush's most forward-thinking and experimental record, and definitely one of her best.

Your feedback for The Dreaming