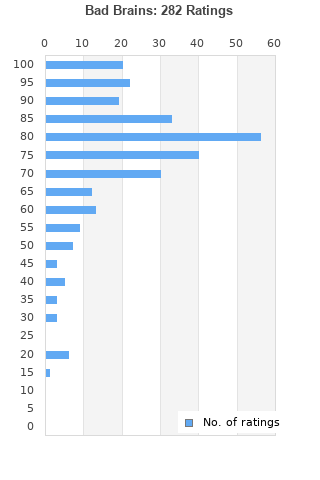 Bad Brains - Live [Used Very Good CD]
Condition: Very Good
Time left: 4h 9m 17s
Ships to: Worldwide
$16.44
Go to store
Product prices and availability are accurate as of the date indicated and are subject to change. Any price and availability information displayed on the linked website at the time of purchase will apply to the purchase of this product.  See full search results on eBay

Bad Brains is ranked as the best album by Bad Brains. 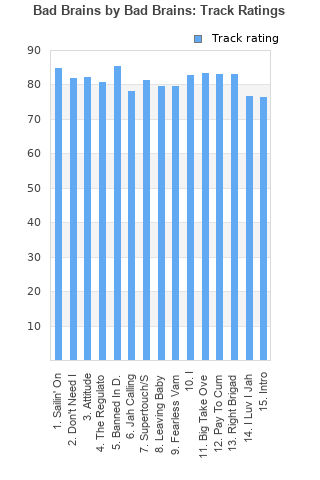 Rating metrics: Outliers can be removed when calculating a mean average to dampen the effects of ratings outside the normal distribution. This figure is provided as the trimmed mean. A high standard deviation can be legitimate, but can sometimes indicate 'gaming' is occurring. Consider a simplified example* of an item receiving ratings of 100, 50, & 0. The mean average rating would be 50. However, ratings of 55, 50 & 45 could also result in the same average. The second average might be more trusted because there is more consensus around a particular rating (a lower deviation).
(*In practice, some albums can have several thousand ratings)
This album is rated in the top 5% of all albums on BestEverAlbums.com. This album has a Bayesian average rating of 77.0/100, a mean average of 75.5/100, and a trimmed mean (excluding outliers) of 77.1/100. The standard deviation for this album is 17.9.

Awesome debut that is mostly hardcore punk sometimes offset by reggae proving to be a one of a kind combination.

I like the Reggae on the punk record... that was a first for me. I enjoy what this represents... but probably not going to be spinning often for me.

Best punk album of all time.

Get rid of the reggae tracks, which I think they do poorly (nothing against reggae itself), and you have yourself a winner.

The rest is also enjoyable.

Want something different? Here you go. Bad Brains is a former jazz & fusion band made up of African American Rastafarians who love reggae and fast punk. The album was originally released on cassette only, reissued in 1996 with a bonus track. It's the fastest, most well played punk you'll ever hear...and then on the next track, it's smooth mellow reggae that's as good as any American band has ever played it. It takes a couple of listens to get your head around it, but it's a powerful and amazing album. Adam Yauch of the Beastie Boys calls it the best punk/hardcore album of all time. Dave Grohl says that Bad Brains is the best band he's ever seen live. The influence of this album is huge, and it's maybe the most important punk album ever made in America.

Adam Yauch would agree with the best hardcore label. I would too, but the Dead Kennedy's I think have the title. It's close, and the reggae in this album is really good too.

Your feedback for Bad Brains