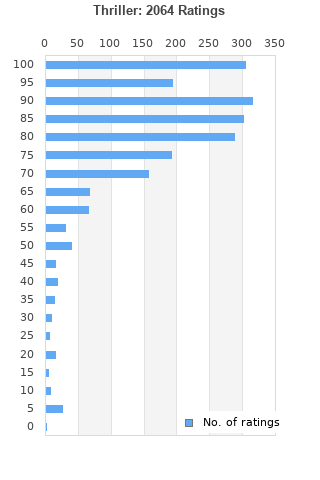 Thriller is ranked as the best album by Michael Jackson. 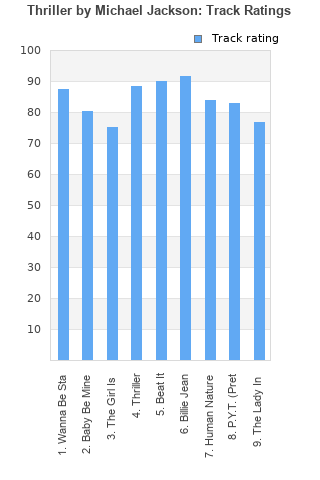 Rating metrics: Outliers can be removed when calculating a mean average to dampen the effects of ratings outside the normal distribution. This figure is provided as the trimmed mean. A high standard deviation can be legitimate, but can sometimes indicate 'gaming' is occurring. Consider a simplified example* of an item receiving ratings of 100, 50, & 0. The mean average rating would be 50. However, ratings of 55, 50 & 45 could also result in the same average. The second average might be more trusted because there is more consensus around a particular rating (a lower deviation).
(*In practice, some albums can have several thousand ratings)
This album is rated in the top 1% of all albums on BestEverAlbums.com. This album has a Bayesian average rating of 82.1/100, a mean average of 80.1/100, and a trimmed mean (excluding outliers) of 82.1/100. The standard deviation for this album is 18.4.

the best album ever
key tracks: beat it, billie jean

He certainly earned his tag as the King of Pop with this one. So many iconic songs on one album - Thriller, Billie Jean, Beat It. My personal favourite is Baby Be Mine.

The man made Thriller…

If you listen to this album, loudly, and don’t begin to dance…you might already be dead.

Love, love, love Human Nature (in addition to the usual hits on this record).

Hate, hate, hate The Girl is Mine

Hard to beat the king of pop at his best! The turn of Thriller, Beat It, and Billie Jean is one of the best in Pop history.

the biggest of all time

Excellent album for its time. All tracks are solid.

Your feedback for Thriller