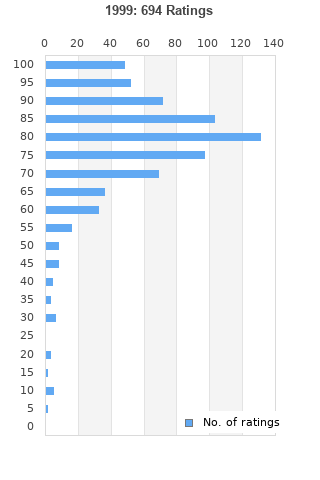 1999 is ranked 2nd best out of 62 albums by Prince on BestEverAlbums.com.

The best album by Prince is Sign 'O' The Times which is ranked number 189 in the list of all-time albums with a total rank score of 9,299. 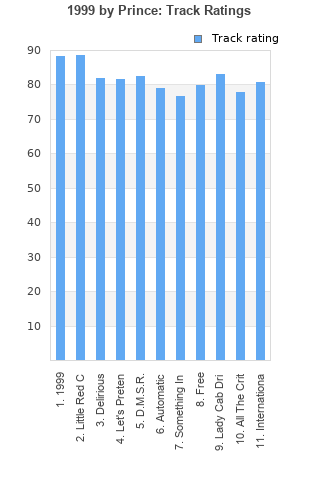 Rating metrics: Outliers can be removed when calculating a mean average to dampen the effects of ratings outside the normal distribution. This figure is provided as the trimmed mean. A high standard deviation can be legitimate, but can sometimes indicate 'gaming' is occurring. Consider a simplified example* of an item receiving ratings of 100, 50, & 0. The mean average rating would be 50. However, ratings of 55, 50 & 45 could also result in the same average. The second average might be more trusted because there is more consensus around a particular rating (a lower deviation).
(*In practice, some albums can have several thousand ratings)
This album is rated in the top 2% of all albums on BestEverAlbums.com. This album has a Bayesian average rating of 79.3/100, a mean average of 78.0/100, and a trimmed mean (excluding outliers) of 79.4/100. The standard deviation for this album is 15.5.

It's a solid album for me - 1999, Little Red Corvette, DMSR and Automatic stand out for me. The rest is good with nothing falling below good.

Great start with the first two songs. The rest of the album not so special imo.

Let’s be honest the lyrical content on this album is extremely cheesy even by early 80’s cheesy standards which sets the bar rather high in this regard. Not convinced ? Try “1999” with its lets party through the apocalypse mantra or “Lady Cab Driver” being every teenagers wet dream or the simply awful “International Lover” with its “thank you for flying Prince airlines its going to be a bumpy ride”

Regardless this is all inconsequential as ‘1999’ ultimately sold by the truck load, made Prince a household name and would set the scene for what would be the main course ‘Purple Rain’ which would propel the Love Symbol into the mega stratosphere of super stardom alongside the likes of Michael Jackson, Bruce Springsteen and The Rolling Stones

An extremely solid album, but some of the songs need to be trimmed

On the long side and the peaks aren't quite as high as on Purple Rain, nor are they as well distributed.

This album is pretty damn good. Every song is solid and great in it's own right. Obviously 1999 and Little Red Corvette take the cake, but that does not diminish my admiration for tracks like Lady Cab Driver, D.M.S.R., and Let's Pretend We're Married. I think I prefer 1999 to Purple Rain, just because there's more to listen to on this one, and more of any Prince (at least the 80s stuff) is pretty amazing in my book.

I think I like this more than Purple Rain. Although, when I play Purple Rain again I may change my mind. What I like about the Prince albums is that everything is slightly different from one album to the next. The fact that I have this on purple vinyl adds to the experience.

This one is where he started throwing the drum machines around your ears, goddamn it's too much.