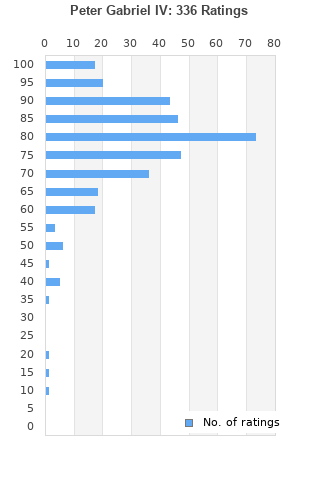 The best album by Peter Gabriel is So which is ranked number 258 in the list of all-time albums with a total rank score of 7,262. 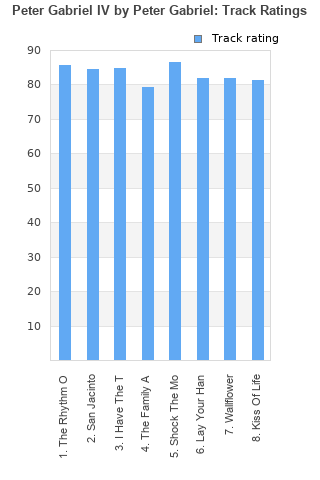 Rating metrics: Outliers can be removed when calculating a mean average to dampen the effects of ratings outside the normal distribution. This figure is provided as the trimmed mean. A high standard deviation can be legitimate, but can sometimes indicate 'gaming' is occurring. Consider a simplified example* of an item receiving ratings of 100, 50, & 0. The mean average rating would be 50. However, ratings of 55, 50 & 45 could also result in the same average. The second average might be more trusted because there is more consensus around a particular rating (a lower deviation).
(*In practice, some albums can have several thousand ratings)
This album is rated in the top 2% of all albums on BestEverAlbums.com. This album has a Bayesian average rating of 78.9/100, a mean average of 78.3/100, and a trimmed mean (excluding outliers) of 79.1/100. The standard deviation for this album is 13.7.

Not a bad album, but pales in comparison to predecessor, it takes some risks as the previous one did, but they are not so effective.

Otherwise known as, security, Peter Gabriel's fourth album sees him expanding his sound and embracing more world music textures. Some excellent tracks in, San Jacinto, shock the monkey, and, wallflower, which is probably my favourite song on the LP. Some beautiful moments here. Another superb Peter Gabriel album.

An album that works in its entirety not just reliant on a few great songs. Gabriel broke new ground in the 80s with the integration of African musical influences with mainstream western rock & pop and this album is where he did it best. Special mentions to Rhythm of the heat and Wallfower, but it is the sublime San Jacinto that is the stand out song. Beautiful.

This is my favorite Peter Gabriel album..amazing, really like "Rhythm of the Heat" and "I have the touch". Thought that it was called "Security" (Geffen 2011). IMO, an overlooked album.

Your feedback for Peter Gabriel IV