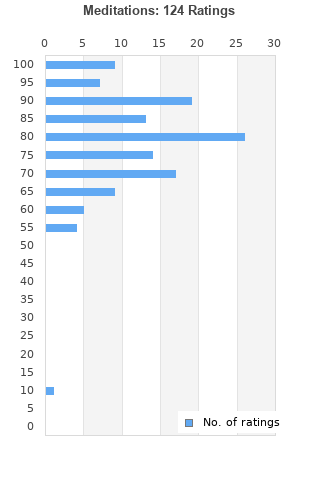 Meditations is ranked 9th best out of 77 albums by John Coltrane on BestEverAlbums.com.

The best album by John Coltrane is A Love Supreme which is ranked number 77 in the list of all-time albums with a total rank score of 18,151. 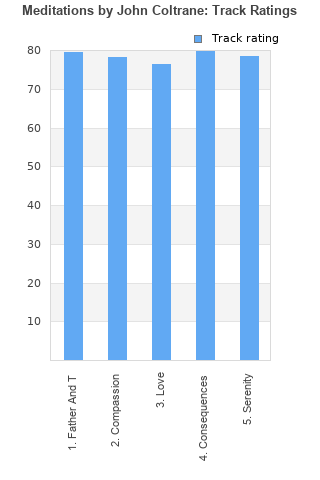 #
Track
Rating/Comments
1.
Father And The Son And The Holy Ghost
Rating: 79 (12 votes)Comments:

Rating metrics: Outliers can be removed when calculating a mean average to dampen the effects of ratings outside the normal distribution. This figure is provided as the trimmed mean. A high standard deviation can be legitimate, but can sometimes indicate 'gaming' is occurring. Consider a simplified example* of an item receiving ratings of 100, 50, & 0. The mean average rating would be 50. However, ratings of 55, 50 & 45 could also result in the same average. The second average might be more trusted because there is more consensus around a particular rating (a lower deviation).
(*In practice, some albums can have several thousand ratings)
This album is rated in the top 2% of all albums on BestEverAlbums.com. This album has a Bayesian average rating of 79.4/100, a mean average of 79.3/100, and a trimmed mean (excluding outliers) of 79.9/100. The standard deviation for this album is 13.0.

2nd comment: listened to this album a lot more since and is now probably my favourite free jazz album and one of my favourite Coltrane albums.

Better than A Love Supreme but not as good as The Ascencion, so 95

I like the insane, frenzied sound of this album but I struggle to indulge in it for the full 40 minutes.

One of those John Coltrane albums that's either genius or nonsense, depending on what mood I'm in. It sometimes works for me, other times it just annoys and frustrates me. Am i trying to like it? Do I like it? Or do I hate it? I don't know, I really don't know.

Your feedback for Meditations