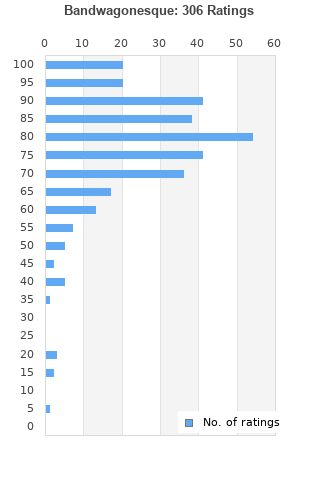 Bandwagonesque is ranked as the best album by Teenage Fanclub. 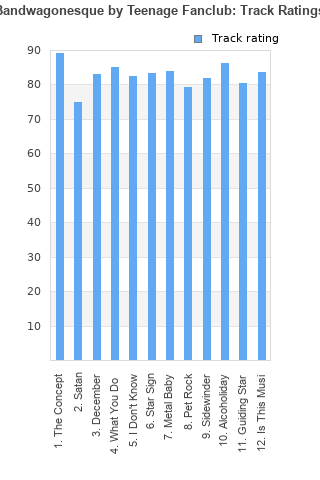 Rating metrics: Outliers can be removed when calculating a mean average to dampen the effects of ratings outside the normal distribution. This figure is provided as the trimmed mean. A high standard deviation can be legitimate, but can sometimes indicate 'gaming' is occurring. Consider a simplified example* of an item receiving ratings of 100, 50, & 0. The mean average rating would be 50. However, ratings of 55, 50 & 45 could also result in the same average. The second average might be more trusted because there is more consensus around a particular rating (a lower deviation).
(*In practice, some albums can have several thousand ratings)
This album is rated in the top 3% of all albums on BestEverAlbums.com. This album has a Bayesian average rating of 78.4/100, a mean average of 77.6/100, and a trimmed mean (excluding outliers) of 78.6/100. The standard deviation for this album is 15.0.

Spin magazine named Bandwagonesque top album in 1991 over Nevermind and Loveless. It's a great album but not as significant as those two records.

Before ‘Bandwagonesque’ came out I was already massively into Teenage Fanclub so naturally the album rocked my world right ? Wrong !. You see 1991 was simply one of those sublime years whereby iconic album followed by iconic album came out (‘Nevermind’ , ‘ Loveless’, ‘Out of Time’ , Screamadelica’, ‘Spiderland’ ) ultimately leaving this superb release under their considerable shadow. It literally took years and I mean years before I circled back and dusted off that CD I purchased back in 91 and really got to know ‘Bandwagonesque’ and of course I loved it with so many sections reminding me of Big Star the power pop pioneers

This is almost certainly the album I have listened to the most ever because there was a period after the release of Thirteen when I listened to little else on my walkman than a cassette with Bandwagonesqe on one side and Thirteen on the other.

One of the great melodic rock records of the nineties. Sure it sounds like Big Star, but who doesn't like Big Star? Packed with amazing melodies, catchy hooks and genuine heartfelt emotions.

Enjoyable guitar based indi rock. Songs a little samey though.

Classic jangly guitar music in the vein of Big Star and early R.E.M. Beautiful songs and sounds help to produce one of the most underrated albums of 1991. Lovely.

Your feedback for Bandwagonesque