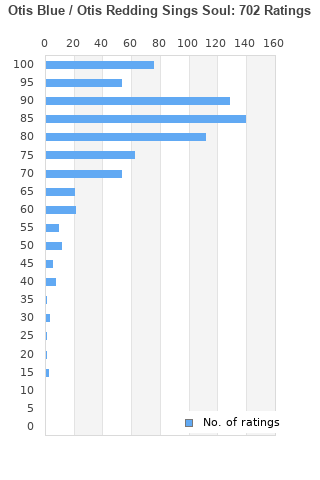 *NEW* CD Album Otis Redding - Otis Blues Sings Soul (Mini LP Style Card Case)
Condition: Brand New
Time left: 1d 21m 25s
Ships to: Worldwide
£1.99
Go to store
Product prices and availability are accurate as of the date indicated and are subject to change. Any price and availability information displayed on the linked website at the time of purchase will apply to the purchase of this product.  See full search results on eBay 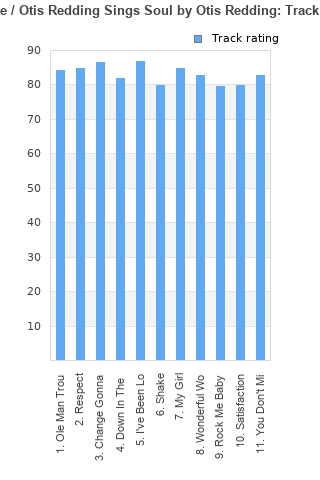 Rating metrics: Outliers can be removed when calculating a mean average to dampen the effects of ratings outside the normal distribution. This figure is provided as the trimmed mean. A high standard deviation can be legitimate, but can sometimes indicate 'gaming' is occurring. Consider a simplified example* of an item receiving ratings of 100, 50, & 0. The mean average rating would be 50. However, ratings of 55, 50 & 45 could also result in the same average. The second average might be more trusted because there is more consensus around a particular rating (a lower deviation).
(*In practice, some albums can have several thousand ratings)
This album is rated in the top 1% of all albums on BestEverAlbums.com. This album has a Bayesian average rating of 82.7/100, a mean average of 82.1/100, and a trimmed mean (excluding outliers) of 82.9/100. The standard deviation for this album is 14.4.

Who else can do this? Seriously who? Every other singer I’ve heard can either croon, rock or sing soul. Otis is in a class of one because he can do it all with that voice. Name your children after him - the man is a God.

This album is everything I found to be great in soul music.
Lots of bangers, and tear droping ones too.

Decent album full of covers with Otis' spin on them. The influence is clear as you can hear the little accents that Otis' adds still today in music across all genres. The free, scatting-like nature of his style has lived on due, in much part, to this album.

Side 1 of this album is just so perfect, a real slow burner with great, great songs. The bass really pins the tracks whilst the brass punctuates and then on top of that you have Otis's amazing voice. Change is Gonna Come is my pick here but so many other great songs including Respect and My Girl which is just one of the most perfect pop songs ever recorded.

This is the one that finally made me 'get' Soul. 'I've Been Loving You Too Long' is a masterpiece

Pretty solid. Would love a stereo version of this. Redding brings it every single track.

Listening to the world-weariness of Otis Redding's voice on these recordings, it's hard to believe he was only 24 years old when he pulled together some of the world's greatest soul musicians to make this incredible album. "Ole Man Trouble" is one of Redding's most introspective compositions, and showcases not only his vocal abilities, but also his emotional range as a songwriter.

One of the great soul albums. Otis blue, is a superb collection of originals and classic covers. Every song is excellent, especially, I've been loving you too long, my girl, and, satisfaction. Redding's breathless vocals and performances are still as exciting today as they ever were. Classic soul music.